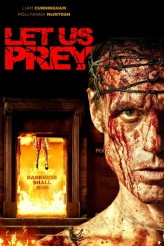 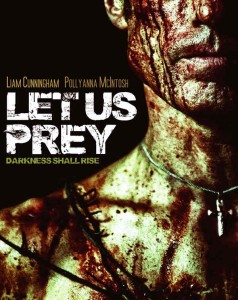 LET US PREY takes place in a Scottish city so bleak and barren and empty at night that it comes as something of a surprise to find that the film is set in our world as opposed to, say, Purgatory. The story unspools over five hours, starting when PC Rachel Heggie (Pollyanna McIntosh) wakes up, gets out of bed and heads to the police station for her first shift.

Before Rachel even arrives, she witnesses a hit-and-run committed by speeding, booze-swilling teen Caesar (Brian Vernel). The victim has vanished by the time Rachel gets to Caesar, but there’s blood on the headlight. Rachel hauls Caesar in with her and meets her new boss, Sgt. MacReady (Douglas Russell), who has a penchant for Biblical quotes and a harsh way of dealing with suspects.

There’s already another prisoner in the downstairs cells, one of Caesar’s teachers, Mr. Beswick (Jonathan Watson). In the course of the evening, we’ll also meet two of Rachel’s fellow PCs (Bryan Larkin, Hanna Stanbridge) and a local doctor (Niall Greig Fulton), as well as the victim (Liam Cunningham) from the hit-and-run, looking no worse for wear.

A series of strange, bloody events transpire, some in chronological order, some in flashback. Rachel, with a tragic past of her own, is soon fighting for her life.

Director Brian O’Malley certainly knows how to create a sense of dread and has atmosphere to spare. However, the screenplay by Fiona Watson & David Cairns seems a bit contradictory. It becomes clear what’s happening, but there’s a cause and effect that’s implied that doesn’t seem to hold up to logic. At the same time – phrasing this to avoid specific spoilers – the denouement doesn’t square with what’s come before. LET US PREY turns out to have a particular point in mind, but it’s not supported by the evidence provided.

Even so, there’s an atmosphere of tension that turns effectively nightmarish. Cunningham has understated but absolute conviction and the philosophical weariness of someone who really has seen it all. McIntosh is convincing as the novice cop who proves tough and resourceful.

While LET US PREY is not drenched in end-to-end gore, its violence is intense, and there are scenes of child abuse that are at the far end of the spectrum. Sensitive viewers should take note.

LET US PREY is one of those idiosyncratic indie horror oddities. It is by turns inventive, pretentious, trippy, mis-structured, sometimes visually wrenching, with a dark mood that lingers in the mind well after it ends.