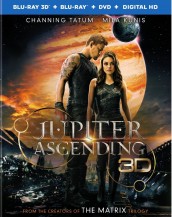 Reviewed this week: JUPITER ASCENDING, FOCUS, BLINDSIDED and much more 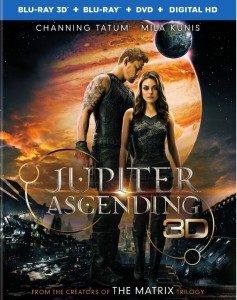 JUPITER ASCENDING – Before I saw anything else about JUPITER ASCENDING there is one thing that any naysayer can comment on. It looks freaking amazing. The special effects that are in the film are outstanding and the budget to create so many effects on such a massive scale must have ate a considerable amount of the budget for JUPITER. It is then unfortunate that some of this budget wasn’t given to writing a better storyline that would carry such awesome special effects. We are introduced to Jupiter Jones (Mila Kunis), a daughter of a Russian couple living in Chicago and living a far from glamorous life. However, when some weird dudes try to kill her and she is saved by the half man/half beast hybrid of Caine (Channing Tatum) she learns she is actually the queen of Earth and gets mixed up in some royal universal conspiracy where off-world humans use the Earth and other planets to harvest humans for livestock in order to prolong their own life in the vastness of space. At least, that’s what I think it is about because there is so much gratuitous violence, so many characters, so much hopping back and forth from one place to the next it is hard to differentiate one batsh** crazy idea from the next batsh** crazy idea. Obviously, this doesn’t sit well with Jupiter and she uses Caine and some other … let’s just call them freedom fighters to put a stop to these nefarious actions.

In-between we have multiple toilet bowl cleanings, the re-emergence of the dinosaurs, the red spot on Jupiter exploding, Sean Bean NOT dying, goth chick on a bike, oozing pool of regeneration, forced marriage, family kidnappings, hybrid creature gallery and much more. Add to this nonsensical fighting for the sake of nonsensical fighting and there are some severe problems with JUPITER ASCENDING. That said, it is worth checking out for the vast array of special effects that are really pretty damn awesome. 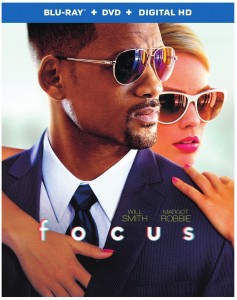 FOCUS – Will Smith has made some interesting choices in his career after being one of the most sought-after actor in Hollywood. FOCUS returns the actor to a more stable role and showcases what made him so good – his personality and likeability on camera. FOCUS is a caper story but told in variety of acts without any of the previous acts relating to the overall whole of the storyline. Smith stars as Nicky a high profile con man that has mastered the art of misdirection. He takes under his wing a novice thief in Jess (Margot Robbie) and trains her to be one of the best. But he only wants to take her so far before cutting bait. In the first few cons, he uses Jess to swindle a deal with a rich Japanese businessman that can’t help but gamble on, well, really anything. He also uses her for some low-rent misdirection thefts at the airport and on crowded streets. Here’s where the title becomes ironic as the film quickly loses focus and becomes a pseudo-romance between Nicky and Jess and turns to another act where Nicky tries to swindle a race car driver but ends up on the wrong end. Maybe one big heist wasn’t enough to carry the film so they divided it into different con jobs with different players in each con. But it ends up a bit disjointed and yes, unfocused. That said, FOCUS is by far not a bad movie. The acting is fine, the production is top notch and has a slick overall feel to it. So it is definitely worth watch. 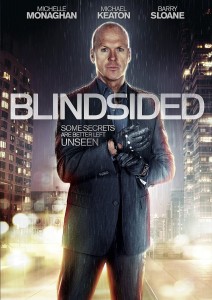 BLINDSIDED – Strange how some actors that are presumable hot commodities these days get roped into doing a direct-to-video production. Lucky, BLINDSIDED isn’t that bad so it might be awash with their credibility. Michelle Monaghan stars as a former military photographer that gets blinded after a suicide bomber in Iraq set off an explosion near her. Now, living in a swank New York apartment she is taken prisoner by a duo of bad guys looking for a hidden treasure, one of whom happens to be recent Academy Award nominee Michael Keaton. See, Monaghan’s boyfriend in the movie wasn’t a nice guy like she thought and instead had strong ties to crime families and stole not only a bunch of cash from them but millions in diamonds. So when the two men break into the apartment and kill her boyfriend, a game of cat and mouse begins. This isn’t a bad thriller. It has all the usual elements of a woman fighting for her life against some really bad men. The blindness thing plays well and they use it fairly well in the ending. But it isn’t high on originality. Luckily the production values are good and with a strong cast can overcome some of those shortcomings. 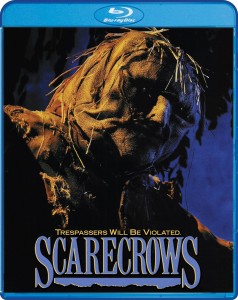 SCARECROWS – This little horror gem from the 80s is finally getting its comeuppance in high definition thanks to the great folks over at Scream Factory. The story begins as a kidnapping of a father and daughter in a prop plane after five military types steal a millions of dollars. Along the way, one of them betrays the rest of the group and parachutes away with the cast. After landing to look for him in a cornfield, they begin to witness some pretty remarkable sh** as scarecrows in this cornfield just don’t keep birds away they take out anyone that comes into their territory. One of the great things about SCARECROWS is the originality of the horror. When one of the scarecrows dispatches one of the military guys they supernaturally turn them into another scarecrow complete with straw and all. But they look identical to the real thing. The acting here is nothing special and laughably funny at times but the ideas and the scares of having these dead people come back to life as scarecrows is at times really spooky. This has become a cult classic and deservedly so and it is welcome to see it finally get a Blu-ray release. 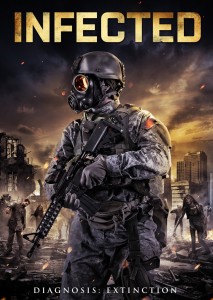 INFECTED – If you are hungry for zombie fix (see what I did there?), you could do a lot worse than INFECTED. You could do a lot better too. INFECTED plays more like a high school student’s final drama project than a full blown big budget zombie flick – so be warned there are plenty of jerky camera movements, bad lighting, bad acting and some amazing bad camera angles and so on. Not that you can’t understand what is going on or can’t see, it just is armature hour. In a small town, a group of friends get trapped during the zombie apocalypse at their school and lucky for them a group of surviving military types show up to help out. There are way too many characters that you barely even know their name before getting to be zombie food. There are way too many times where the characters sit around lamenting about their predicament. And there is just way too much of it all because clocking in at almost two hours, it drones on and on when about an hour in you just want a quick and tidy resolution. Needless to say, I’ve seen much worse in this genre, so if you need a fix and seen everything else, this is out there.