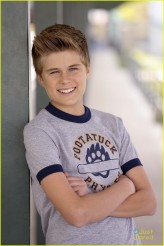 The actor talks the pitfalls of junior high 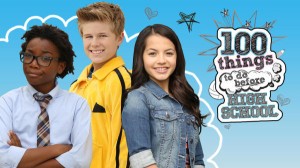 In Nickelodeon’s 100 THINGS TO DO BEFORE HIGH SCHOOL, Saturdays at 8 PM, three middle-school friends work on accomplishing the above. The series was created by Scott Fellows.

ASSIGNMENT X: What was the thing you most wanted to do before high school?

OWEN JOYNER: Go to NYC and see as many Broadway shows as I can fit in and be cast in a cool TV show.

AX: Have you gotten to do it yet?

JOYNER: I have not gone to NYC yet, but I have booked the coolest role on the funniest show!

AX: Do you have any kind of list of things you want to do before a certain point in your life – college, age twenty-one, etc.?

JOYNER: I want to graduate college by the age of twenty-two and I want to make as many people laugh as I can in my lifetime.

AX: How are you like your character Crispo and how are you different from him?

JOYNER: Crispo loves to have fun, has a huge heart, is genuine and a little naïve. Yes, I am a lot like him, just a lot more mature.

AX: In the show, Crispo has a new haircut. How do you feel about your look on the show?

JOYNER: That was some crazy hair before my haircut, but I am slowly getting control of it.

AX: There’s a scene where you’re all dressed up as superheroes. Was that fun to do?

JOYNER: It was great make-believe fun, but then [on the other hand] what fourteen-year-old guy likes to run around in tights?

AX: Do you have a favorite superhero?

JOYNER: All of the Avengers, especially Iron Man.

AX: When you’re not working, do you have any hobbies?

JOYNER: Classic rock, including Queen, Led Zeppelin, Clear and a wide variety of songs from musicals.

AX: What would you most like people to know about 100 THINGS TO DO BEFORE HIGH SCHOOL?

JOYNER: Best show to make not just the young audience laugh – watch it with your parents, grandparents, teachers, church groups. You get the picture.