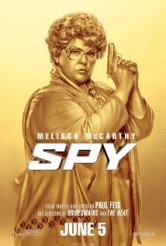 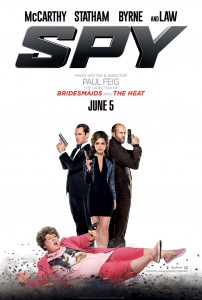 SPY is a rarity, a send-up of the James Bond genre that actually works. Part of its success is that star Melissa McCarthy actually seems like someone who could both be totally taken for granted and entirely capable, part of it works because the script by director Paul Feig has a lot of good jokes that are timed well and part of it is because, for once, this is a comedy that doesn’t get smug on behalf of its protagonist. The structure and the characters have much more going on than we would guess at first glance.

We meet McCarthy’s CIA Agent Susan Cooper as she remotely assists debonair field agent Bradley Fine (Jude Law) on a mission involving an arms dealer. She’s a flirtatious Chloe to his upbeat Jack Bauer, the voice in his ear guiding him safely through dangerous terrain. Of course, Fine gets all the glamour and glory, while Susan works alongside other CIA analysts in a bat-infested basement. Furthermore, Susan adores Fine, who shamelessly uses this to his advantage, treating her like she’s a sweet kid with a crush.

However, when Fine is killed in the next step of the same mission, things at headquarters turn upside-down. It seems that the now-dead arm’s dealer’s daughter Rayna (Rose Byrne) has inherited not only her father’s fortune, but the nuke he was planning to sell. Worse, Rayna and her team know the identities of all the CIA’s remaining field agents. Burning to avenge Fine, Susan volunteers to go undercover, as she’s the only one whose face is unknown to the terrorists. Susan’s boss (Allison Janney) agrees to this, as it turns out that Susan had great action chops before she let Fine talk her into being his wrangler.

The Agency consistently gives Susan the most mundane, embarrassing disguises possible and books her into a series of awful temporary residences. She also has to contend with seething tough-guy field agent Rick Ford (Jason Statham), who is convinced he’s the only one who can see this through. Good thing Susan has her own staunch ally in CIA colleague Nancy (Miranda Hart). And then Susan runs into Rayna.

In a comedy with many assets, one of the biggest is the ever-changing but consistently hilarious relationship between the inventive Susan and the haughty mean girl Rayna. Susan has the ability to be a chameleon, which comes in even handier than expected, and McCarthy sells it as deftly and drolly as the material decrees. Byrne, so often cast in serious roles, gets to be hilariously imperious, while still conveying that there’s some human feeling in there … way, way, way down.

Hart is all warmth and excitement as Susan’s loyal pal and Statham is on the money as his Ford growls through an ever-escalating list of his macho credentials.

As a writer, Feig gets in all the beats that are present in big-budget spy films, and as a director, he makes SPY look suitably glossy and glamorous, while staging action sequences that have real heft and viciousness.

There are lessons here – trust yourself, have confidence, etc. – but they’re mostly woven into the flow of the narrative rather than delivered via speeches.

SPY is fun, funny and friendly while simultaneously being true to the genre that provides its title.