A Far Off Place soundtrack review 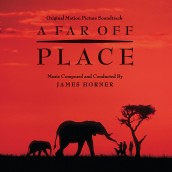 Way before she trekked the Pacific trail, Reese Witherspoon braved 2,000 miles of the Kalahari desert in this surprisingly perilous 1993 adventure film from the family-friendly likes of Disney, who were certainly showing surprising bite at the time with the such movies as WHITE FANG. Having released that double score (along with a bunch of worthy soundtracks from other unlikely Disney pictures), Intrada dips again into the well they first dug for PLACE at the time of its release, now coming up with 75 minutes to fully show off James Horner’s relatively unsung, strikingly epic score. Even though he ventured to Apartheid South Africa to far darker effect in BOPHA! A FAR OFF PLACE has more than a bit of that menace, starting straight off as poachers wipe out the guardians of two white teenagers, leaving them to make an incredible journey to safety with the help of a young tribesman, a big elephant and some cute non-food animals – of course with the murderous villains on their trail.

It’s a striking musical mix of Disney nature spectacle, tender sweetness and percussive peril. Horner seamlessly combines these elements with his majestic and dangerous score, of course graced with a telltale soaring theme that drives the action and emotion along with melodic grace, all while still acknowledging the story’s inherently savage nature. Hence oompa brass emphasizes animal pratfalls, gentle strings and noble horns bonding kids with a sense of purpose. Symphonic action stampedes, while instrumental exotica like African drumming and Oriental shakuhachis paint the kind of ethnic landscapes that Horner is so adept at scoring. Whether they took place in South American (WHERE THE RIVER RUNS BLACK) the Middle East (DAY OF THE FALCON) or the jungle planet Pandora (AVATAR), Horner has always gives his locales a strongly empathetic, and unabashedly melodic, Americana orchestral shape, an approach that always made Horner a natural for Disney, especially when helping youths and their animal friends cross a truly dark continent – whose expanse now truly gets to trumpet itself for this powerful release.

Article Source: Assignment X
Article:CD Review of  the A FAR OFF PLACE soundtrack