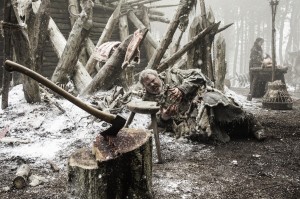 While GAME OF THRONES provides its customary thrilling action with the title element in “The Sons of the Harpy,” along with a two-against-four battle featuring Jaime (Nicolaj Coster-Waldau) and Bronn (Jerome Flynn) vs. four Dornish soldiers. However, the episode is just a bit light on the snappy dialogue that the show usually features, as Tyrion (Peter Dinklage) has a rather terse sparring partner in the uptight Ser Jorah (Iain Glen).

In King’s Landing, Cersei (Lena Headey) succeeds in sending new queen Margaery’s (Natalie Dormer) father Mace Tyrell (Roger Ashton-Griffiths) off to deal with the Iron Bank of Braavos. Cersei then gives the High Sparrow (Jonathan Pryce) the right to arm his flock in defense of the Faith. She suggests they arrest Margaery’s brother Loras (Finn Jones) for being gay. In fact, the Faith Militant arrest, assault and torture plenty of people. Margaery appeals to her young husband, King Tommen (Dean-Charles Chapman), to free Loras. Loras first goes to Cersei, who says she didn’t have Loras arrested. Tommen then finds his way to the High Sparrow blocked. Unwilling to have his soldiers attack the High Sparrow’s followers, Tommen returns to Margaery empty-handed. Margaery is furious and determines to write to her grandmother.

Given that we know (even if Margaery and Cersei don’t) that Olenna Tyrell calmly poisoned the previous king, the appalling Joffrey, it’s easy to suppose she’ll have something to say about this. Arming religious zealots is often a perilous course in any event, and Cersei’s behavior is such that viewers can devoutly hope this scheme backfires on her spectacularly.

At Winterfell, Baelish (Aiden Gillen) counsels Sansa (Sophie Turner) to use her charms while he’s away. Baelish believes that Stannis Baratheon (Stephen Dillane) will take Winterfell and install Sansa, the last surviving Stark (so far as Baelish knows) as Wardeness of the North. If this doesn’t happen and the Bolton family is able to hold Winterfell, Baelish assures Sansa she’ll still be able to avenge her family. Baelish says he’s been summoned by Cersei to King’s Landing.

It’s a little unclear as to what Baelish is really up to here. He can’t be so naïve as to think Sansa is actually safe with the psychotic Boltons, but on the other hand, he seems very fond of Sansa, who doesn’t appear entirely averse to Baelish’s affections. The scene tells us what Sansa believes at this point, but not whether we should believe it as well. It’s interesting without being emotionally rousing.

Up at the Wall, Lord Commander Jon Snow (Kit Harington) is asking the Northern lords for men to help defend the realm against the White Walkers. He very reluctantly (at the urging of Sam) writes to Roose Bolton, even though Jon knows Bolton murdered his brother Robb. Melisandre tries to seduce Jon, who turns her down because of his vows and because he is still thinking of the dead Ygritte. As the rejected Melisandre leaves Jon’s chambers, she says, “You know nothing, Jon Snow.” Since this was Ygritte’s perpetual refrain, it’s startling to Jon and to us.

Meanwhile, Stannis has a gentle moment alone with his daughter Shireen (Kerry Ingram), proving he’s got a heart inside his body after all. It’s a sweet scene that gives the cranky claimant to the throne some warmth, and Ingram is delightful as the philosophical young princess.

In Dorne, Ellaria Sand (Indira Varma), outraged lover of the dead Oberyn Martell, brings together the Sand Snakes – three of Oberyn’s daughters – who agree to join her in vengeance. They plan to harm or kill Cersei’s daughter Myrcella, who is presently at the Dornish court, knowing this will start a war with the Lannisters, who they blame for Oberyn’s death. Meanwhile, Jaime and Bronn have secretly arrived in Dorne and are trying to get to Myrcella to rescue her. Bronn seems to have a good idea that Myrcella is actually Jaime’s daughter rather than niece, but doesn’t ask about this aloud.

The fight between Jaime, Bronn and a group of Dornish guards is well-staged, making particularly good use of Jaime’s metal hand as a sword-blocker.

In Essos, Jorah finally takes the gag of his captive, Tyrion. Tyrion is profoundly relieved to hear that the queen he’s being taken to is Daenerys (Emilia Clarke) rather than Cersei. When Tyrion thinks aloud, realizing that Daenerys may not forgive Jorah as he hopes, Jorah hits Tyrion.

While it’s always a pleasure to see Dinklage as Tyrion, the scene feels a bit like filler, since it doesn’t move the plot forward.

In Meereen, the Sons of the Harpy – the secret pro-slavery group trying to depose Daenerys – attack Daenerys’ soldiers. The battle is ferocious, with huge casualties on both sides. By the end, Daenerys’ trusted adviser Ser Barristan Selmy (Ian McElhinney) and Unsullied leader Grey Worm (Jacob Anderson) both appear to be fatally wounded, though both put up impressive fights.

Ser Barristan and Grey Worm are both very likable, invaluable characters. Their loss is tragic both on their own accounts and because, without them, Daenerys is that much closer to being forced into a corner.

There is a lot of planning, conjecture and discussion in “Sons of the Harpy.” Even though Cersei’s deal with the High Sparrow will almost certainly have huge ramifications, only the final sequence both gives us characters we care about in an epic situation and shows us something that immediately affects the story going forward.