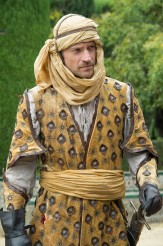 ©2015 HBO/Macall B. Polay
Nikolaj Coster-Waldau in GAME OF THRONES in
Reviews 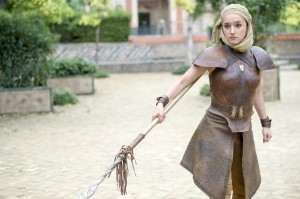 Keisha Castle-Hughes in GAME OF THRONES in "Unbowed, Unbent, Unbroken” | ©2015 HBO/Macall B. Polay

When plotlines on GAME OF THRONES advance, they do so sometimes with the subtlety of chess moves, and at other times with the lunge of a dragon. Although we don’t see Daenerys and her fire-breathing offspring in “Unbowed, Unbent, Unbroken,” the latter is very much the case here, with Arya (Maisie Williams), Tyrion (Peter Dinklage), Jorah (Iain Glen), Queen Margaery (Natalie Dormer), her brother Loras (Finn Jones), Jaime (Nicolaj Coster-Waldau), Bronn (Jerome Flynn), Princess Myrcella (Nell Tiger Free) and the unfortunate Sansa Stark (Sophie Turner) all facing changes and crises.

After Arya gently gives a suffering, dying girl the lethal water of the temple, her instructor Jaqen H’ghar (Tom Wlaschiha) deems his pupil ready to be someone else, though not to be “no one.” Arya discovers that the Faceless Men seem to get their new visages from those who have died in the temple. This isn’t exactly new territory in the world of fiction, but since it involves fierce, uncompromising Arya, it will be interesting to see where this leads.

In Dorne, Jaime and Bronn get close to rescuing Myrcella (actually Jaime’s daughter, though he pretends he’s her uncle), but they are thwarted by both the Dorne palace guards and the Sand Snakes, who are determined to punish the innocent princess for the death of Oberyn Martell. There is a terrific sword battle. One of the Sand Snakes escapes with Myrcella – everybody else gets arrested. The swordfight is thrilling and delightful. It’s unclear at this point if anyone will ever impress on the Sand Snakes that Oberyn, with his keen sense of justice, would be appalled by their intentions toward Myrcella. It’s also unclear exactly how this provocation will affect international politics, as Myrcella’s mother Cersei (Lena Headey) will no doubt want vengeance of her own but has other things happening.

For starters, Cersei receives a visit from Petyr Baelish (Aiden Gillen). Baelish appears to be selling out Sansa, telling Cersei that the Stark lady is back in Winterfell, about to marry Ramsay Bolton (Iwan Rheon). Since Stannis Baratheon is about to march on Winterfell, Baelish’s advice is to let the Boltons and Stannis’ army battle it out, and then for the Lannister bannermen and the Knights of the Vale, now under Baelish’s command, take out the victor. Cersei agrees to this, in exchange for making Baelish Warden of the North.

Baelish is so tricky – and the schemes he’s set in motion so elaborate – that it’s hard to guess what his real end game is here. Gillen has the gift of playing the character so that we understand why even seasoned skeptics believe him, at the same time that we surmise he’s got some other agenda altogether. If he was angling to get Sansa for himself, he had the opportunity. Does Baelish want to be Warden of the North, or is he putting the houses of Lannister, Bolton and Baratheon on a collision course in the hopes of somehow winding up on the Iron Throne himself? Time, and future episodes, will tell.

Lady Olenna Tyrell (the incomparable Diana Rigg) has returned to King’s Landing to sort out the arrest of her grandson Loras (Finn Jones), brother to Queen Margaery (Natalie Dormer) by the Faith Militant. Loras, Margaery and Olenna have no problem point-blank lying to the High Sparrow (Jonathan Pryce) and saying, no, Loras has no sexual interest in other men. However, the Faith Militant has found the male prostitute who’s been having an affair with Loras. Not only does Loras remain charged with sexual crimes, but now Margaery is arrested for bearing false witness before the Faith, much to Cersei’s delight. King Tommen (Dean-Charles Chapman) is no help whatsoever to his wife here.

While this moves the plot right along, it’s a bit depressing to note that, even in an imaginary realm, the predominant religion is homophobic. Then again, the Faith Militant shows every sign of being a power-crazed theocracy, and power-crazed theocracies are known to demonize just about everyone in sight, so that’s true to real-world form.

Meanwhile, Sansa’s wedding to Ramsay goes forward. The ceremony is somber and beautiful, outdoors in candlelight under the falling snow. The wedding night is horrendous, as anyone who has been watching the series can predict. Ramsay rapes Sansa and orders Theon to watch. The scene is filmed as tastefully as possible – we see Ramsay rip the back of Sansa’s gown, then see Sansa’s face, then Theon’s face.

Let us step back a moment from the series for what this reviewer hopes is a rare bit of commentary on overall public reaction. People have declared they have stopped watching GAME OF THRONES due to this rape scene. This seems confusing. Contrary to what some people believe, when it comes to actual depiction of rape (as opposed to reports of rapes, which are rife in the back story, along with murder and infanticide), GAME OF THRONES has been rather sparing. Khal Drogo raped Daenerys Targaryen on their wedding night. This relationship later bloomed into love, which is a rather ghastly message. Then there was Jaime’s possible rape of Cersei in front of the corpse of their eldest son – Cersei was saying “no” but gripping Jaime, so the lack of consent wasn’t equivocal. Again, icky message – an instance where “no” may really mean “yes.” Then we come to Ramsay raping Sansa. Ramsay is an irredeemable monster of a character, a serial killer, rapist and general sadist whose intelligence and imagination arguably make him worse than the late Joffrey Baratheon, who was kept in check partly by his own idiocy. Sansa isn’t going to grow to love Ramsay – this is rape as a horrendous action where later self-defense and even vengeance will seem reasonable options. It is not filmed or scripted in a way to be remotely titillating; it is shown as something meant to be demoralizing to Sansa. This, in other words, is rape as rape, an act of violence rather than desire, something wholly hateful – and this is the time people find it offensive within the storytelling?

Back in the land of less controversial story elements, Tyrion (Peter Dinklage) and Jorah (Iain Glen) are captured by pirates. Tyrion saves his own life temporarily by pointing out that the pirates, who want to sell him for souvenir dwarf parts (one part specifically), need to first show that the part in question belongs to a dwarf. When the talk turns to the fighting pits, Tyrion speaks up on Jorah’s behalf, and Jorah finally concedes that he killed a Dothraki Blood Rider in single combat. It’s always great to hear Tyrion in persuasive mode and it’s good to see Jorah take an interest in his own survival.

“Unbowed, Unbent, Unbroken” is anything but uneventful. It is propulsive narrative that is filled with suspense, collision and cliffhangers.