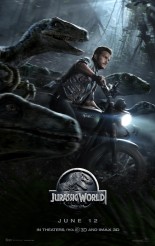 The dinosaurs are great, the humans less so 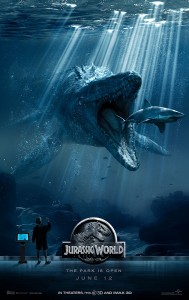 There is a fair amount that is right with JURASSIC WORLD, starting with the excellent rendering of its main attraction, the dinosaurs. Animatronic and digital technology have both come a long way since the original 1993 JURASSIC PARK, which at the time was plenty impressive in its own right. The creatures in this fourth film in the series look every bit as real as the humans who share the screen with them. JURASSIC WORLD’s main problem is that the dinosaurs are also more compelling as characters than the humans.

This is a bit strange, seeing that director Colin Trevorrow and writer Derek Connolly (who shares script credit with Trevorrow, plus the separate writing team of Rick Jaffa & Amanda Silver) previously teamed on the delightful SAFETY NOT GUARANTEED, which had splendidly crafted characters and dialogue. In JURASSIC WORLD, we get archetypes that show their ancient DNA all too clearly.

The set-up for JURASSIC WORLD makes as much sense as anything else that would serve to have so many gene-spliced dinosaurs roaming an island off Costa Rica (most of the filming was done in Hawaii and Louisiana) once again. Investor Simon Masrani (Irrfan Khan) has picked up where the late entrepreneur John Hammond left off/gave up, and made Hammond’s dream of a dino zoo/theme park a reality that’s been open to the public for ten years when the film starts.

Alas, the public’s insatiable clamor for something new has led to the creation of a new gene-spliced creature, Indomitus rex, which is a Tyrannosaurus with some extra added features. She is in her own paddock, for now. Meanwhile, military man Hoskins (Vincent D’Onofrio) sees possible battlefield implications for a small pack of velociraptors that respond to training from Owen (Chris Pratt).

Young Gray (Ty Simkins) and his older teen brother Zach (Nick Robinson) are supposed to be visiting their aunt Claire (Bryce Dallas Howard) at Jurassic World. Claire, a busy administrator for Jurassic World, pawns her nephews off on her assistant, who almost immediately loses track of the boys.

Both the Indomitus rex and the military plot threads require not so much suspension of disbelief but rather kicking disbelief out the back of a speeding jeep. From what we see in the film, it doesn’t appear that anybody has the slightest idea of how to contain the new dinosaur, much less how to present it to a paying public. On the flip side, while keeping its genetic materials a secret provides a nice third-act plot twist, there’s no narrative reason for it, because knowing this wouldn’t clue anybody in to what Indy might actually do until she does it.

As for Hoskins’ notion that the velociraptors are ready to run a “field test,” this is equivalent to someone trying to use some lions, carefully trained to do a few tricks by a specific individual, to safely obey someone else entirely in something that’s not in their repertoire. This goes beyond normal movie villainy into the realm of cartoon logic.

The subplot with Claire having to discover her maternal feelings during a crisis, and being vilified for not spending time with her nephews at her workplace while things are still tranquil, is not given any sort of modern update. This kind of narrative thread used to be standard once upon a time and it’s relied on for no good reason here. Claire is also made to appear fairly bad at her job, inasmuch as she doesn’t seem to have a very clear idea of how the park operates or exactly why people would want to see dinosaurs. Granted, there are plenty of actual marketing people who don’t connect at all to what they’re selling, but instead of giving Claire authenticity, it just makes her seem that much shallower as a character.

Pratt acquits himself well, so committed to his performance that we can’t tell when he’s interacting with something that’s physically on set with him and something that’s entirely computer-generated.

The dinosaurs are beautifully rendered and, let’s face it, irresistible. Though it would be nice to get a better look at the aquatic Mososaurus and for a little more visual differentiation between the rexes Indomitus and Tyrannosaurus, the JURASSIC creatures are still thrilling. For those who see the glory in these dinos, they’re worth putting up with a lot, including the rest of the movie that surrounds them.