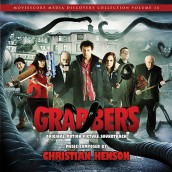 Christian Henson gets drunk with graboids, then epically takes on a horde or robot monsters 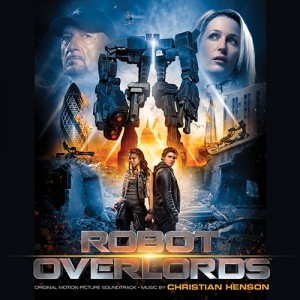 Since throwing an executive team-building trip into a bunch of merc serial killers in SEVERANCE, Christian Henson has proven to be one of the more notably rising British composers with his particular talent for the genre, exploring an eerily time-trapping Bermuda TRIANGLE, then adding to the Sean Bean body count in the lethally atmospheric BLACK DEATH before playing one of history’s monsters for Saddam Hussein’s THE DEVIL’S DOUBLE. Movie Score Media has been a big proponent of this gifted and prolific composer, recently with MALICE IN WONDERLAND, THE SECRET OF MOONACRE, STORAGE 24 and his music for a new TV spin on SINBAD. But Henson has been no more impressive than with the label’s new, evil double whammy of GRABBERS  and ROBOT OVERLORDS one score offering a sly Irish-flavored spin on TREMORS while the other impressively fuses old school scoring and the high-tech for an imperious army of mechanoids.

There’s a monstrously delicate balance to any comedy-horror score. One light tip too much, and the music will encourage one to laugh at a pitiful, toothless creature. A swing the darker way, and the musical jokes will be scared away as the tone goes on a mis-matched rampage. Henson can be congratulated for navigating between both ends, especially given that he’s got to be drunk as a skunk to combat fang-mouthed , tentacled creatures that would give the Graboids a run for their money. But before hilariously slurred brass enter this ingenious, relatively small picture, Henson’s score sets an ominous, rhythmically gnashing tone, with a reverberated motif that no doubt conjures up a bit of ALIEN for these creatures’ space-bound origins. GRABBERS‘ Gaelic setting adds much scenic mirth to the score, bringing out the usual suspects of an accordion and fiddle to join the orchestra. But it’s a whole other level of inventiveness as Henson breaks into jig-like action theme to battle the beasties, with woozy horns piling on the beers. You could just as well assume this is the best score ever written for a LEPRECHAUN movie with how well Henson develops the score, deliberately building from slow, suspenseful atmosphere to the point where all roly-poly hell loose. Henson embodies the Irish fighting spirit as a mad, desperate dance, effortlessly switching partners between slasher dissonance, desperate chases and a gigantically heroic climax that neatly ties his themes together. Delightfully stumbling about like a kraken OD’ing on whiskey before getting its melodic act together, GRABBERS (now watchable on Netflix Instant) is the height of cleverness, music that succeeds as making one laugh before gobbling for the throat.

Electronic synthesis is all the rage these days in conjuring post-apocalyptic young adult sci-fiction driven scenarios – scores that at once have a touch of 8-bit retro while hitting the glowstick floor with trance /hip hop club beats. What’s especially welcome is when composers have the orchestral muscle to back up that tween approach, especially if that might is carried in the claws of the ROBOT OVERLORDS. But don’t let an even sillier title than GRABBERS‘ dissuade you from Henson’s next, ambitious teaming with director Jon Wright, whose cinematic scope this time encompasses all of the United Kingdom, and the world when it comes to a mechanoid invasion that makes RED DAWN-ish resistance fighters out of a group of valiant kids. What comes as no surprise is just how smart and intricately constructed Henson’s score is in giving blockbuster scope to his music. Sure you’ve got the gnarly, pulsating synths to herald the invasion, their whooshing, rocket engine circuitry sound given energized symphonic back-up that’s no stranger to a multiplex world reshaped by the Hans Zimmer sound. But what’s particularly cool is how Henson twists, and distorts the grinding, beeping digitized pulsations about to create truly unique, and creepy metallic vibes, conveying how its heroes avoiding brain-sucking alien wavelengths. But surprisingly, it’s the more organic components of the score that are even more impressive, especially in Henson’s manipulation of the human voice. A lonely female sings a lullaby theme for childhood lost, while an imposing wall of male voices are chopped up and reverberated as a rhythmic device, or finally used for soothing, heavenly deliverance. Rock guitar gets across the youthful determination to wipe out the robot bastards, with a swaggering, swirling orchestral theme dealing the heroic blows for humanity. As big as “Robot Overlords” does get, it’s the more intimate instruments like bell percussion and piano that really sock home the underlying subtext of childhood lost to the metal men. All are impressive components of Henson’s unique, involving work that pushes the sound of the YA genre into new musical realms that are at once futuristic while thankfully being as emotionally old as the symphonic hills for this soundtrack that truly rules.

Click on the link to Purchase the GRABBERS soundtrack

Click on the link to Purchase the ROBOT OVERLORDS soundtrack