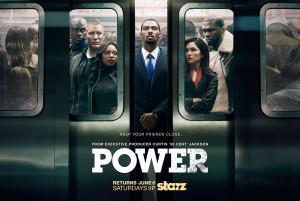 Courtney Kemp Agboh is the creator and show runner of POWER, now in its second season Saturdays at 9 PM on Starz. In the drama, Omari Hardwick stars as James “Ghost” St. Patrick, a successful New York nightclub owner who has built his legit business with the proceeds from the drug trade. His already complicated world has grown a good deal more dangerous with threats from within his own organization and his attraction to an old girlfriend (Lela Loren) who is now a federal prosecutor.

Agboh (whose previous credits include ELI STONE, MY OWN WORST ENEMY, HAPPY TOWN, THE GOOD WIFE, which earned her an Emmy nomination, HAWAII FIVE-0 and BEAUTY AND THE BEAST) is one of POWER’s executive producers, along with Curtis “50 Cent” Jackson; Jackson also costars as Kanan, who is trying to recover lost turf as the second season begins.

At a press event held by Starz for the Television Critics Association, Agboh talks about her collaboration with Jackson. “When I started writing [POWER], he had given me music that I was listening to already to start writing. So we actually sort of would cross. He would give me a piece of music, and then I would send him something to read, and we would go back and forth with it.”

50 Cent’s music and persona provided Agboh with some inspiration for POWER. “First of all, source material right here,” she says, indicating Jackson. It is not drawn from her own experiences, Agboh adds with a laugh. “I’m from Connecticut. This is not my autobiography. I went to school with Heather and Buffy and Jessica and Lindsay, okay? But the elements of the show that are universal, the ones about, ‘Can I change my life because my past dictates my future? Am I always going to be this way? Could I be bigger than what I am?’

“When I was a little girl, my imagination was what helped me deal with some negative elements in my childhood, and so the imagination part is always there. You add my dad, who was born with no money and made himself into the person that could raise his kids in Connecticut. Take that, and then you take 50 Cent, and you take Curtis’ autobiography and mix all of that together, and that’s POWER. So yes, it is masculine, but it’s almost each character on the show, including Kanan, is a part of me. I’m always writing from a perspective of, ‘I understand this person.’ My heart gets broken like Tommy’s [Joseph Sikora]. I have divided loyalties like Ghost’s. I have incredible brutality, trust me. But  all those things and the calculation of Kanan, when I was a kid, I was obsessed with chess. That’s all this is, us working together to create something that feels real to both of us.”

Jackson’s onscreen role increased as Agboh saw what he could do, the writer adds. “I’ll be honest with you, one of the things that popped for me in the first season was Curtis. There’s very little of Kanan in the first season – when we think about the first season, it doesn’t feel that way. When you think about it, you think Kanan was in the whole season. He was [approximately] five scenes. We shot them in three days because of the [tight] schedule. So it’s this incredible presence. That hero shot that we did when we brought him in in the first place, he fills up the entire frame. There are two things going on when you watch Curtis. You’re seeing 50 Cent, and then you start to forget that, because you’re seeing Kanan. And this season, there’s so much Kanan that popped for me, I was like, ‘Okay, we’re going to make this season the season of Kanan. We’re going to disrupt this relationship and put a third party in there and see what happens.’ So for me, that was one of the things that was really, really big and really shifted the energy of the show this year.”

After the session, Agboh takes time for some private conversation, which took place before the announcement of POWER’s pick-up for a third season and Agboh’s new overall deal with Starz, which has her continuing to run the series.

ASSIGNMENT X: You mentioned that you’d like to do a series about your childhood. Where do you see that being done?

AX: Do you think you could be show-runner on two shows at once?

AGBOH: People do it. One of my great mentors is Greg Berlanti, so we’ll see. When I worked for him, he was writing ELI STONE, which is where I worked, DIRTY SEXY MONEY and BROTHERS AND SISTERS. That’s my goal – my goal is to always have an empire.

AX: Given that you wrote for ELI STONE, do you feel in any way that POWER is related to that show?

AGBOH: Absolutely. About the spiritual element, about the idea of right and wrong, about having a higher purpose, “Why did I survive?” Absolutely. No question.

AX: Is the musical aspect something that carried over from ELI STONE as well?

AGBOH: Yes and no. I’m a musical theatre person, actually. I was a singer. So I always love music.

AX: Anything else you’d like to say about POWER right now?

AGBOH: What I would love to say is that I really want people to sample the show, because if they watch the show, they will love it. People who don’t want the show are all people who never watched the show. They’re not people who started and stopped. They’re only people who haven’t watched it. So watch it, you’ll love it, I promise. And Season 2 is better than ever.