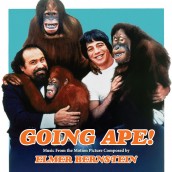 Though he’d never stopped scoring dramatic subjects like THE GREAT SANTINI and ZULU DAWN (not to mention SATURN 3‘s  hulking robot), the 1980s proved to be a three ring circus that proclaimed Elmer Bernstein as a king of comedy. He was certainly on a roll after the hijinks of ANIMAL HOUSE, MEATBALLS and AIRPLANE! scores that famously played their screwball humor “straight.” But definitely not so with the monkeyshines of 1981′s GOING APE!, which teamed TV’s TAXI stars Tony Danza and Danny DeVito with three mugging orangutans. While definitely not the most sophisticated comedy that Bernstein would ever score, the sheer delight that he put into this fairly obscure soundtrack makes his monkeyshines into an unexpected delight.

Apes and screwball comedy have always gone together like Cheetah and bananas, plots revolving around how to deal with a barrel of monkeys that have shown up from EVERY WHICH WAY BUT LOOSE to DUNSTON CHECKS IN,  in this case sending the loveable furry trio into a schlub’s apartment after his circus-owning dad passes. Of course there’s a massive inheritance to go with it if his son can deal with the primates and their equally hairy, and diminutive human handler. It’s a high concept shtick that Bernstein announces straight up with his rollicking circus music. And while there’s plenty of calliope stylings at hand, what makes GOING APE! particularly fun for Bernstein fans is its pokey jazz comedy. One can sense how much fun Bernstein has subverting the jazz rhythms that truly made his bones in the 50s, a soft-shuffle here that also brings to mind ANIMAL HOUSE‘s  hilarious scoring as Flounder is hustled to the stable to take revenge on a fascist white stallion. GOING APE! plays like the next generation to that particular score in many ways, as the loopy carnival rhythms orchestrally lope about with comically suspenseful, sneaky pizzicato brass. It’s an ungainly, and very funny way of embodying orangutan movement. The fact that the themes come across as being as menacing as they are goofy also show off GOING APE! as the ancient ancestor of GHOSTBUSTERS  in its mockingly dangerous way of setting up scary characters as nothing worse than ungainly kids.

But then, pretty much every style is in target range of Bernstein’s cartoonish cage when it comes to this delightfully unapologetic score, from aping Mozart opera to doing a very credible riff on THE GODFATHER theme for two mob goons, or using heavenly voices and sparkling strings. Almost as astounding as seeing this forgotten, but very worthwhile score get a release is that it’s come in at 77 minutes. Intrada’s completest presentation not only offers numerous alternates but also a number of catchy pop songs, from the driving R & B rhythm of “It Ain’t Who’s Right, It’s What’s Right” to the romping country-western “One Way Street.” The tune-packed “Apes” even has the love ballad “Suddenly” and the winsomely poetic, self-reflective “Grim Brother Grimm,” which has both female and male vocalist versions. Consider GOING APE! as Bernstein comedy at its scruffiest, unkempt in its loopy, -four-knuckle lurking way whose deliberate, jazzy absurdity showed that Bernstein could indeed be in on the goofy musical joke, as much as he otherwise tried to avoid that particular banana peel. The liner notes by Jeff Bond (who just finished his own PLANET OF THE APES tome) are likely funnier than the film itself as they come up with every primate metaphor in the book.

Click on the link to Purchase the GOING APE soundtrack