Home » 3:10 To Yuma and The Gunman soundtrack reviews 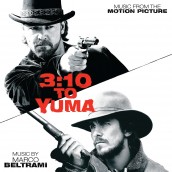 CD Reviews: 3:10 TO YUMA and THE GUNMAN soundtracks

Marco Beltrami's western, and action scores come out with both guns blasting 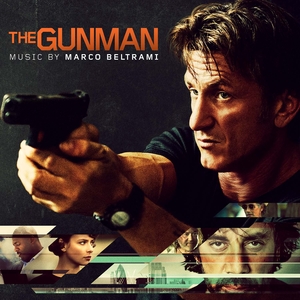 With the NRA-approved likes of TERMINATOR 3, LIVE FREE OR DIE HARD and MESRINE: PUBLIC ENEMY #1, Marco Beltrami has shown his certain set of skills when it comes to using firearms, at least musically when it comes to a soft-spoken composer whose scores often make particularly loud bangs – no more so then with a fully loaded re-issue of his ode to spaghetti westerns, or his recent score that effectively turns the similarly circumspect Sean Penn into a weapon-blazing action hero.

When hearing how Beltrami created a unique, and gnarly sound for James Mangold’s mighty good 2007 reboot of 1957’s 3:10 TO YUMA,  one might look back to his untraditional take on the modern western for the psychological, south of the border “revenge” movie THE THREE BURIALS OF MELQUIADES ESTRADA, which twisted about its Mexican rhythms to paint a hard-bitten, “real” portrait of weathered frontier men (a feet he most recently pulled off again with the even crazier HOMESMAN). As translated to the frequently emulated territory of Ennio Morricone, Beltrami’s Oscar nominated take on tack pianos, mouth harps, spur-hitting metal percussion and twanging nylon and steel string guitars has an impact that’s as vibrant as ever in La La Land’s newly expanded soundtrack. Tasking a desperate rancher to take a perhaps not-so villainous gunslinger to the train that will transport him to the hanging hoosegow, Beltrami creates a menacing, exciting landscape, full of eerie, blistering samples, furious action rhythms and shivering tension. The whole effect is unsettling and dangerous, playing the west as a place where conventional, black hat / white hat scoring nobility is in short supply, using the orchestra in a way that seems completely authentic to the period while re-inventing it at the same time. But 3:10  is also quite a lot of fun when Beltrami tips his ten-gallon to Morricone with aplomb, especially as clopping percussion plays the climactic race to the train, complete with a soaring, fateful Mexican-style trumpet. It’s a score that does a lot of make Russell Crowe’s gunslinger one of the more memorable bad-asses since The Man With No Name, while imparting heroic vulnerability to Christian Bale’s rancher.

Having last handled a rogue agent with Pearce Brosnan’s NOVEMBER MAN, Beltrami take quite a bit of a less explosive approach for Sean Penn’s THE GUNMAN.  Not that there isn’t percussive excitement to spare, but the big difference is that Penn has never been perceived as James Bond – something that makes this largely successful attempt to TAKEN-ize the beyond-serious actor so interesting. While way better cinematically than Penn’s last film in that realm with THE INTERPRETER, THE GUNMAN shares its setting of Africa as a jumping off point for overseas mayhem that stretches from London to Barcelona. While not specifically doing a Dark Continent score as such, Beltrami’s truly interesting percussion conveys the violent, tragic land within as Penn seeks redemption for the sins of his past. It’s the character’s haunted quality that gives an often weird, interesting soulfulness to THE GUNMAN‘s introspective approach. The music has quite a bit of ethereal space for a genre score, conjuring the dread feeling of being surrounded by the many ghosts he’s put in the grave for right, or mostly wrong causes. But this is a chase thriller after all, which Beltrami recognizes in his tense, heartbeat percussion, especially in the dynamic finale that lets the bulls out, along with the kind of pulsating electronics, menacing brass and rampaging percussion that first made Beltrami’s bones in the horror genre – here used for multinational corporate payback at its best Beltrami also gets to write that one, romantically resplendent all-is-going-to-be-well climactic cue that proves the one sunny spot for every body count movie, You might even detect an unintentional flavor of “Born Free” in “The Gunman’s” return to a hopefully better Africa.

Click on the link to Purchase the 3:10 TO YUMA soundtrack

Click on the link to Purchase the THE GUNMAN soundtrack

Article Source: Assignment X
Article:CD Review of  the 3:10 TO YUMA and THE GUNMAN soundtrack