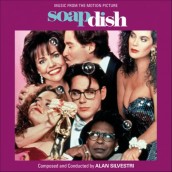 Having cut his very early musical chops traveling with a neighborhood Cuban band, it was destiny itself that Alan Silvestri would get to mix that island’s boisterous rhythms with a very American brand of hilariously bombastic orchestral drama for this all-star 1991 send-up. But then again, Silvestri did start his major scoring career with the adventurous Latin beat of ROMANCING THE STONE before playing the deliciously melodramatic cat fight of DEATH BECOMES HER, all of which made him a perfect over-actor to accompany SOAPDISH with this winning plethora of snappy mambo energy and exuberant orchestrations for a cult comedy score that finally gets the sappily hilarious soundtrack treatment it deserves.

Whether it’s BACK TO THE FUTURE or PREDATOR, Alan Silvestri’s music has always been marked with an emotionally heightened sense of melody, especially when dealing with straight-up seriousness in the Oscar-nominated likes of FORREST GUMP, SOAPDISH slides effortlessly between the worlds of more conventional comedy stylings and the Latin big band world. One can only pity Silvestri for the viewing time he put in to nail the daytime TV drama suspects of woeful violin sympathy, grandiose award ceremony fanfares and pokey snooping about, all the better to nail the arch scheming in front of, and behind the camera. And when it comes to brain surgery in a world of impossible-to-kill characters, Silvestri milks every ounce of obvious suspense with a hilarious lack of restraint with his telltale shivering strings, lurking piano percussion and exclamatory crescendos that could easily play a lurking Predator if one didn’t know better. Yet there’s real, emotional feeling for these hams as well in the sincerely beautiful love theme, whose lilting violin and piano comprise but one of SOAPDISH‘s many exceptional melodies. While Silvestri had used 1940s jazz swing for WHO FRAMED ROGER RABBIT? it was truly SOAPDISH that unleashed his inner Henry Mancini, as crossed by the brass of such Cuban bandleaders as Perez Prado, using tangos, mambos and cha cha’s as the stuff of high comedy. Latin rhythms race to the next shocking, swooning revelation, or do a deliciously slow tango to milk the unexpected revelations, with a classical violin brining an air of snootiness to the distinctly populist entertainment that SOAPDISH is cleverly making hay of.

While it could be easy to be condescending, what’s made SOAPDISH endure is the obvious endearment that’s gone into the film and its boisterously lush music. SOAPDISH brims over with high energy fun and delight as it effortless switches tango partners from traditional scoring to Latin jazz, his career’s cultural roots finally singing out with breezy, brassy energy (with the truly Cuban score THE PEREZ FAMILY to follow). Now Quartet Records follows up their Silvestri double-header of SUMMER RENTAL and CRITICAL CONDITION with this jewel in the composer’s comedy crown. Hearing the full extent of Silvestri’s warm romance and Cruella De Ville-worthy villainy is the equivalent of going binge listening to a whole season of THE YOUNG AND THE RESTLESS with numerous further alternates expanding on the score and its tropical rhythms, as well as some knowingly kitschy Muzak tunes.

Click on the link to Purchase the SOAPDISH soundtrack