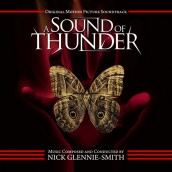 If you step on a butterfly, you'll most definitely hear Nick Glennie-Smith roaringly good score

You’d be hard pressed to hear Ray Bradbury when this wannabe epic showed the time-wave shock of what happens when errant dino-hunters from the future happen to step on a hapless butterfly. Certainly filmmaker Peter Hyams was used to bagging bigger cinematic game when he took on the project for cash-strapped Franchise Pictures. But if the company’s fall made the real havoc here into the unrealized ambition of effects that seemed like a chicken in Jurassic Park, that didn’t stop Hyams from delivering an unexpectedly entertaining, and at times quite suspenseful film, the vision of what it’s production should have been truly realized in the impressive score by Nick Glennie-Smith. An OG member of Hans Zimmer’s posse since their days playing for Stanley Meyers, Smith was part of Zimmer’s game-changing team from Remote Control to Media Ventures, journeying from the propulsive likes of THE ROCK to DROP ZONE and KING ARTHUR before mainly continuing on as a top-rank score conductor. Glennie-Smith was well versed in his own propulsive scores like FIRE DOWN BELOW, THE MAN IN THE IRON MASK and WE WERE SOLDIERS when SOUND came calling. Even in the movie might be buried in history for its few admirers (of which I count myself a non-guilty pleasure one), having Dragon’s Domain Records excavate his score after a decade is certainly better late than never.

THUNDER really roars as an unsung, incredibly dynamic score that makes full use of Smith’s knowledge honed in the multiplex-adrenalin trenches of Team Zimmer. Like Brian Tyler’s TIMELINE, Smith relies on a near-constant sense of rhythm to connote future machines propelling foolhardy scientists (and in this case idiot great white hunters) across the millennium-stream. Percolating danger hangs over a score that always seems to be in motion, creating an incredibly suspenseful feeling of world-changing devastation in the offing at any second. The themes are here in abundance, yet Smith keeps them subtly in the string-heavy background, much like the danger brewing about the increasingly affected future. You can certainly sense how Smith’s programming and orchestrational skills (of course with his writing at the forefront) are really saving the day from what could have ended up sounding like a budgetarily-drained score, giving angry, reptilian flesh and blood to the sampled elements. Ethnic flute emulation also helps with the score’s sense of pre-history rampaging into the present, A SOUND OF THUNDER has a breathless, thrilling quality to it that knows when to run, or hide as the time-hybrid creatures stalk within arm’s reach, its sturdily melodic construction building to a slam-bang race-to-save-the-butterfly finish. It’s all certainly as exciting as any music Glennie-Smith wrote for the far better received ROCK, with the added bonus of its sci-fi score elements that make this ever-accelerating score anything but a time capsule.

Dragon’s Domain makes an auspicious, Tyrannosaurus-sized imprint with their first release, sporting enveloping sound, and a nicely designed fold-out booklet with comprehensive notes by genre score archeologist Randall D. Larson. Here’s hoping this label will continue to unearth such worthy scores that relatively recent time forgot, even as its composer continues to conduct such action blockbusters as THE AMAZING SPIDER-MAN 2 and TRANSFORMERS: AGE OF EXTINCTION. It’s an arena that THUNDER shows he should be stomping around far more in as a composer as well.

Click on the link to Purchase the SOUND OF THUNDER soundtrack