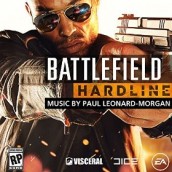 Paul Leonard-Morgan robs out with cop TV as videogame

As you play the “episodes” of BATTLEFIELD: HARDLINE that take a straight-shooting cop from the pride of the force to a vigilante looking to take the force down, you might feel like you’ve been drop-kicked into an R-rated version of CSI: MIAMI or more likely old-school MIAMI VICE given the thrumming rock soundtrack by Paul Leonard-Morgan.

Having impressed with his energetic, often electricity-fueled scores for such rapid-fire films as LIMITLESS, THE NUMBERS STATION and DREDD, Morgan goes for a rawer, rock guitar guitar groove that not only brings to mind Jan Hammer, but also such late 80s Tangerine Dream scores as NEAR DARK and MIRACLE MILE – scores that used propulsive, often country-flavored power chords, thrashing drum percussion and eerie, ambient synths to go for a pedal-to-the-medal groove as opposed to hitting specific action. It’s a grungy, raw power that effectively provides exciting, and menacing music beds for the game’s various gun battles, car chases and way more boring fact finding, giving the impression of the player up against some very bad guys.

There’s a neon energy to Morgan’s work as he gets the first person shooting groove down, making it hard to believe that HARDLINE is his first entry into that arena. But then, Morgan’s had plenty of practice with bad-ass heroes and villains, characters whose music tells you they’re entering the scene packing both sunglasses and machine guns. This is pure adrenalin with some thankfully moody down time that conveys an angry world of cops and kingpins, energized attitude that never gets tiring as Morgan finds one electrifying, bad-ass rhythm after the other that ups BATTLEFIELD: HARDLINE ante of copshow-as-videogame.

Click on the link to Purchase the BATTLEFIELD: HARDLINE soundtrack