Home » Bones Review The Eye in the Sky Season 10 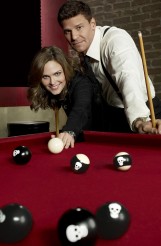 An episode with big changes for Brennan, Hodgins and especially Booth

The BONES episode “The Eye in the Sky” shakes things up in unexpected ways. Viewers familiar with the fact of leading lady Emily Deschanel’s real-life second pregnancy won’t be too surprised that Deschanel’s Temperance Brennan finds that she is expecting a second child with husband Seeley Booth (David Boreanaz), or that both are delighted. Boreanaz (clearly not a double) even executes a celebratory somersault on the couple’s bed.

However, one unforeseen development is that indefatigable scientist Hodgins (TJ Thyne), born with a fortune that he lost thanks to the evil machinations of a psycho serial killer, comes up with a lucrative new product.

The other, more serious development is that Booth, sure he can handle it, investigates the murder of a gambler in an underground card game. Although Booth is able to conquer his impulses long enough to arrest the killer (who had needed money and killed his fellow player for his winnings), the FBI agent’s gambling addiction is fully reawakened by the end of the episode.

Seeing Brennan and Booth determined to keep the new pregnancy secret for now yet being uncharacteristically buoyant in the lab is a good source of amusement, with Brennan not realizing how stern she is most of the time.

There’s also a surprising amount of fun to be had with Hodgins deciding to make his own unbreakable glass beakers on his own time after lab boss Cam (Tamara Taylor) decrees that a) Hodgins has to pay for all the beakers that he accidentally breaks and b) any work Hodgins does to develop shatter-proof containers cannot be done during his work for the Jeffersonian. This means that Hodgins gets to own his creation, which may help him and Angela (Michaela Conlin) get back to their old lifestyle, though they seldom seem to miss it. The banter between Hodgins and lab tech Jessica Warren (Laura Spencer) is playful without being seductive.

However, the key portions of the episode are dramatic, with Brennan, Hodgins and Aubrey (John Boyd) all expressing their concerns to Booth and all trying to dissuade him from this particular assignment. Booth’s argument is that he knows the terrain better than anyone else and is therefore able to fit in and flush out the guilty party. He also swears to Brennan that his love for her, their daughter Christine (Sunnie Pelant) and unborn child is much stronger than his urge to gamble. Booth’s friends and colleagues can observe him through the gambling room’s surveillance system, the titular “eye in the sky,” and we are relieved right along with them when Booth, though clearly tempted to play on, stops the game and makes the arrest. We’re startled and saddened when later, unmonitored, he calls his bookie and bets on a sporting event.

“The Eye in the Sky” makes good points about addiction and denial – how even someone who is otherwise an upstanding citizen with seemingly everything going for him (or her) in life can have a catastrophic relapse and even rationalize it away. It makes sense that Booth doesn’t immediately go back to a card game but instead engages in a different form of gambling, so that he can tell himself the case didn’t really trigger what he’s doing. It’s intriguing and tragic and gives the next set of episodes somewhere to go.