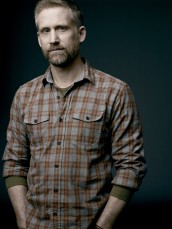 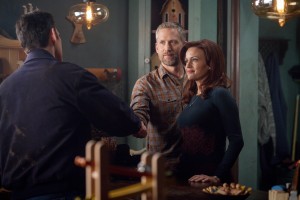 In Fox’s miniseries WAYWARD PINES, Thursdays at 9 PM, Secret Service Agent Ethan Burke (Matt Dillon) is understandably upset. Not only is he trapped in the title town, where people are executed over transgressions like referring to their lives pre-arrival, but he finds his partner/ex-lover Kate Hewson (Carla Gugino) claiming she’s lived here for twelve years, even though she’s only been missing a few weeks. Morever, Kate says she’s been married for years to local toymaker Harold Balinger, played by Reed Diamond.

Native New Yorker Diamond is no stranger to television or to genre. He was one of the starring ensemble in multiple seasons of HOMICIDE: LIFE ON THE STREET and was also a regular on JOURNEYMAN and FRANKLIN & BASH. Diamond has also had arcs on JUDGING AMY, VANISHED, 24, DOLLHOUSE (the gig that first introduced him to producers/writers Joss Whedon, Jed Whedon and Maurissa Tancharoen), BONES, THE MENTALIST, STATE OF AFFAIRS and last season’s AGENTS OF SHIELD, another Whedon/Whedon/Tancharoen production. Feature credits include S.W.A.T., GOODNIGHT, AND GOOD LUCK, MONEYBALL and Joss Whedon’s MUCH ADO ABOUT NOTHING.

ASSIGNMENT X: How would you describe Harold Balinger?

REED DIAMOND: I play [Kate’s] husband, a simple toymaker by day, possibly something else by night. I think I had a couple of scenes with Carla in the opening [episode]. I’ll be more notable as the show goes on.

AX: Is Harold very much a part of the town of Wayward Pines?

DIAMOND: Yes. When Ethan comes to the town, I’m a humble toymaker. I seem like a very mild and simple man, good-natured, affable. I’m now married to his former partner, played by Carla Gugino, which causes him no end of distress. But appearances aren’t what they seem. There’s something else going on.

AX: Had you worked with anybody else in the relatively large cast on this show before?

DIAMOND: Melissa [Leo, who plays control-freak Nurse Pam] and I did HOMICIDE together, back in the Nineties. So I’d worked with Melissa for three or four years, so it was great. Melissa is a powerhouse, she’s an amazing actress. So it was good to see her, and then I don’t think I’d worked with anyone else before, but I was excited – I’d always wanted to work with Matt Dillon and Juliette Lewis, Toby Jones. It’s a pretty stellar cast.

AX: WAYWARD PINES is a miniseries, as opposed to an ongoing series. Does it make a difference to work on something that is closed-ended?

DIAMOND: Yes, it made it very attractive. Because that’s the only way, I think, in some ways you’re going to get that level of talent to show up for a TV show, is if it’s a finite amount of episodes. And the stories are great. I read the pilot and I go, “I need to know what’s going on,” so I immediately read the book [by Blake Crouch, developed for television by Chad Hodge and executive-produced by M. Night Shyamalan] and I was hooked.

AX: Now that your tenure on AGENTS OF SHIELD seems to be over – your evil HYDRA leader was shot by Clark Gregg’s Director Coulson – can you talk about that experience?

DIAMOND: I think Joss and Jed and Maurissa have given me some of the greatest parts of my entire life. So to play the super-villain on that show is a dream come true. Last year, I was doing WAYWARD PINES and they kept calling to have me come down and I probably would have played [a S.H.I.E.L.D.] agent. But to get to play Daniel Whitehall was one of the highlights of my career. I felt like I had to go to super-villain training camp [laughs]. It was great. I got to use every part of my talent in that part. I had to do accents, which was awesome, he had to stand in a very particular way, he had to have that calm, controlled [demeanor] and I would tell you, probably next to MUCH ADO, the most difficult part I’ve played in years, so it’s nice to have your butt cheeks puckered a little bit when you go to work.

AX: Since AGENT CARTER is a companion series to AGENTS OF SHIELD and we know Whitehall is alive in the AGENT CARTER Forties timeline, might you show up there?

DIAMOND: I can’t say anything. I would very much like to. AGENTS OF SHIELD was another idyllic [experience]. The Whedon family has personally invested in giving me great parts and they have and I owe them a debt that will be repaid in the next lifetime.

AX: Can you talk about doing Shakespeare onscreen as Don Pedro in MUCH ADO ABOUT NOTHING?

DIAMOND: I loved it. I call that “a sin eraser.” That’s like one of those jobs that comes around every once in awhile and it makes up for all of your television movie sins. MUCH ADO was one of the highlights of my life.

AX: You made the Shakespearean dialogue sound extremely natural. Had you had a lot of experience doing Shakespeare on stage?

DIAMOND: It’s funny, because about two weeks before Joss called, I lamented to my wife, I said, “Why did I go to Juilliard? Why did I spend four years of my life getting classically trained? I’m never going to do Shakespeare.” And two weeks later, I got an email from Joss – “Would you like to do MUCH ADO?” So I finally, after twenty years, I think even with Daniel Whitehall, having to use accents and voices, I found my Juilliard training finally paid off.

AX: Joss Whedon said in an interview that the two of you liked to be Elizabethan fops during the shoot.

DIAMOND: Oh, my God, yes. [foppish] Between takes, because we love being fops, you still fancy women [fop laugh]. And fopping was fun. We would fop without cessation between takes. And that was also a fun part of that show, was that everyone was having a blast the whole time. No one left. We shot that thing in about ten days and actors, even if they weren’t shooting that day, would be there. And that’s the beauty of Joss – he collects the most wonderful people. So you know, even if you haven’t met someone, they’re going to be spectacular, because he hand-picked them.

AX: In the same interview, he said that for awhile, the two of you had discussed the possibility of Don Pedro being gay …

DIAMOND: I certainly felt that [Don Pedro] was pansexual, without question. The joy of the Prince was, whatever’s around, he’s going to feast on it, whether it’s a man, a woman, a flagon of wine.

AX: Is there anything else you’d like us to know about WAYWARD PINES right now?

DIAMOND: What I love about WAYWARD PINES is, the mystery gets solved very early, and that’s when the show begins. So it’s not going to keep spinning its wheels. You’re actually going to have satisfaction.