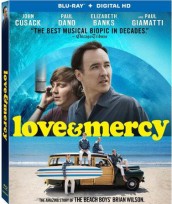 A loving but less than revelatory biopic 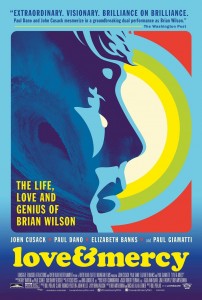 By all accounts – including the one in this film – the life of Beach Boys’ founding member Brian Wilson, one of the most influential singer/songwriters of the twentieth century, was and is a complex affair. A single feature film of normal running time wouldn’t be able to tell Wilson’s story in linear fashion. LOVE & MERCY, which was released theatrically last year, doesn’t attempt to do so. In fact, the film takes such a nonlinear approach that Wilson is played in the film by two actors (three if you count Oliver Pohlad, who plays him as a child, and four if you count the real Brian Wilson, who shows up in the closing credits). Paul Dano plays Brian as the young man in the days when the Beach Boys are up and coming, and John Cusack plays the shattered older version.

Directed by Bill Pohlad and scripted by Owen Moverman and Michael Alan Lerner, LOVE & MERCY intersperses scenes of the younger Brian sometimes being inspired and using his vision to rigorously (but politely) get what he wants in the recording studio, sometimes being dismayed by the naysaying of others around him and sometimes dealing with the onset of severe paranoia.

The older Brian is under the care of psychiatrist Dr. Eugene Landy (Paul Giamatti), who, at least by the time we meet him, is a full-on monster. Fortunately, Brian meets Cadillac saleswoman Melinda Ledbetter (Elizabeth Banks). They fall in love and, when Landy intervenes, Melinda takes it upon herself to rescue Brian from his tyrannical legal guardian.

There is nothing overall wrong with a storyline consisting of “brave princess saves sensitive prince from evil dragon,” but in this context, it does take us somewhat far afield from Brian, who is sometimes absent altogether from the clashes between Landy and Melinda. Even if, as is depicted here, Melinda functioned as Brian’s primary defender in a desperate time, it feels like we ought to see more of Brian in this section.

There are some wonderful moments, including Brian’s composition of “God Only Knows” and the appalling reaction of his father Murry (Bill Camp). There are also scenes of conflict within the band. Everyone accepts Brian’s leadership, but Mike Love (Jake Abel) often voices objections when he feels the sound is changing to something different and unfamiliar.  These sequences are intriguing; they might have been even more so if we had a better understanding of Brian’s bandmates/brothers as individual characters.

We do get a clear, disturbing portrait of Brian’s relationship with dad Murry, who couldn’t be supportive even when he thought he was trying to do so. Camp plays Murry with the kind of righteous desperation that often accompanies bullying in real life; these scenes go a long way towards laying the foundation for Brian’s later issues.

Dano bears a credible resemblance to the real Brian Wilson of the Sixties; Cusack looks nothing like Dano (or the real Wilson), but the two actors create a reasonable sense of continuity between them. We can believe that the misery that Dano’s Brian starts to experience in his twenties has turned him into Cusack’s fearful, hushed forty-something. The filmmakers treat both versions with great sympathy and tenderness, and the music is magical. But Brian Wilson as a person remains elusive here. When the real man is shown in archive footage performing “Love & Mercy” in concert, it’s moving in its own right, but not because it informs or is informed by what has preceded it onscreen.

There are plenty of conventional musician biopics out there and it’s understandable that these filmmakers wanted to do something else. Still, it seems like a number of key moments are kept off-screen and referred to in dialogue or simply suggested without direct mention. It’s refreshing to see a movie that wants to avoid being on the nose, but when it starts being Melinda’s story as much as it is Brian’s, this feels like it’s changing things up for the sake of doing so, rather than to provide new insight via unorthodox methods. LOVE & MERCY is always interesting, but it’s only occasionally illuminating.

Special features on the disc include a featurette on the history of the Beach Boys, a featurette on the production design, deleted scenes and an audio commentary with director Pohlad and co-writer Moverman, who are both executive producers on the film.