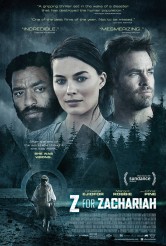 A great performance by Chiwetel Ejiofor and beautiful imagery, but faltering storytelling 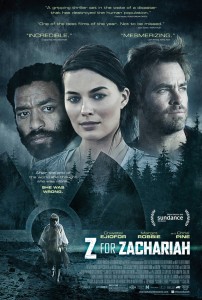 Based on the novel by Robert C. O’Brien, Z FOR ZACHARIAH is a different kind of post-apocalyptic film. There are wastelands we glimpse from afar, but we’re not trapped in them. Likewise, there are no bands of marauders seeking oil, water, slaves or food. Instead, we are in a verdant valley that has somehow been untouched by what our heroine Ann (Margot Robbie) refers to as “the mistake,” which seems to have been nuclear war (it’s not spelled out, but there’s a lot of reference to radiation sickness).

Ann is a young woman alone with her dog in her family’s isolated rural house, making do the best she can until the day she finds John Loomis (Chiwetel Ejiofor) bathing in a contaminated stream. After treating John for radiation sickness with medication he’s brought with him, Ann brings him to the house. When John recovers, he begins pitching in and fixing things – he’s an engineer, so he’s very helpful.

There are differences. Ann is devout; John is non-religious. Ann believes in the best in people; John is more suspicious. Ann is young; John is mature. John gets drunk and tries to force himself on Ann, who frees herself from his grasp. In the morning, John apologizes. Ann seems to forgive him. Later, when Ann offers herself, John declines, wanting to wait until they’re both ready for the kind of changes this may bring. Then Caleb (Chris Pine) shows up. And, alas, although it does so more quietly than many other stories like this, Z FOR ZACHARIAH then goes more or less where we’d expect.

By all reports, O’Brien’s novel goes somewhere else, as it’s a two-hander. Here, director Craig Zobel and screenwriter Nissar Modi attempt to make things more ambiguous, but they fall between real character development and a guessing game of who will turn out to be the bad guy.

Part of the problem is that everyone is underwritten. While Ejiofor has the gravity and chops to make it clear that John is struggling with himself over every action he does or doesn’t take, Robbie and Pine are hindered in different ways. Margot, from the script seems to be still in her teens; Robbie, while clearly a young woman, is in her mid-twenties. Both this casting discrepancy and Margot’s lack of any planning skills that don’t involve crops (specifically, she seems very unaware of human motivation) make her seem intellectually disabled, which probably wasn’t the intent. Pine is asked to play Caleb as both good-natured hero and needling interloper, and the two don’t mesh well here; the character is too schematic and inorganic.

We never do find out why the valley has been spared the fallout that has apparently overtaken the rest of the world, but since that’s not the point, we don’t mind that omission. The chief flaw here is that Z FOR ZACHARIAH wants to give us food for thought, but the filmmakers aim to provide both character study and mystery, not trusting their creations enough for the former and laying things out too clearly for the latter to succeed.