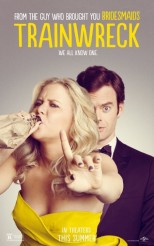 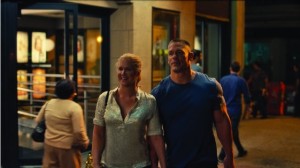 Somewhere between a character study and a semi-unconventional romcom, TRAINWRECK is more funny and enjoyable than not. Its politics aside (what’s one more female screen protagonist primarily defined by her approach to romance at this late date?), Amy Schumer’s script tries to keep us on our toes while getting us to laugh and make us uncomfortable, all at the same time.

TRAINWRECK starts with a clever, jaw-dropping scene that explains our heroine’s from-childhood-on distrust of monogamy. As an adult, Amy (played by scenarist Schumer) is a journalist who works for a “men’s magazine” that appears to combine the glossy prestige of Maxim with the trollish sensibility of a website for 14-year-old haters. Amy aspires to promotion, despite not seeming particularly driven in her profession (one of the less good aspects of character development here). When an anti-sports rant earns Amy an assignment on prominent sports surgeon Aaron (Bill Hader), she finds her subject surprisingly agreeable.

Indeed, Amy and Aaron hit it off so well that, despite her immediate post-coital freakout, they become a couple. This puts Amy in a more sustained state of tension, as she can’t believe someone as considerate and accomplished as Aaron could actually want her.

The film gets big points for not taking the article subplot in a predictable direction, and it applies laughter rather than castigation to Amy’s very active sex life. It also has some killer casting, with LeBron James playing himself as an endlessly concerned friend to Aaron and an almost unrecognizable, completely hilarious Tilda Swinton as Amy’s majestically insensitive boss. Hader is an offbeat, likable voice of reason.

Schumer isn’t afraid to appear unsympathetic, which is a good thing – except when it starts to make her Amy poor company. The onscreen Amy is often tone-deaf to the feelings of others. This is understandable when she’s lashing out, but there are times when it seems we’re meant to empathize with her social missteps and we feel more inclined to recoil, especially when the basics of the incidents become repetitive. No, we don’t need characters who are always appealing, but it helps if they remain interesting and credible when they’re behaving like jerks; Amy sometimes slumps into a kind of uninflected self-absorption. There’s also a tilt into near-fantasy in the third act that threatens to upend what has come before.

Still, the greater portion of Schumer’s writing is sharp, amusing and incisive about some issues that generally aren’t presented in this light. Judd Apatow’s direction allows the characters and concepts room to breathe, while demonstrating effective timing on the majority of the punchlines.

We can see what TRAINWRECK wants us to get us to think about and experience. It rattles on the tracks somewhat, but it gets us to the metaphorical station in one piece.