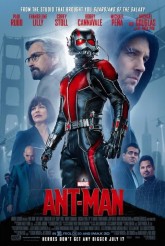 Engaging, funny and a lot of fun 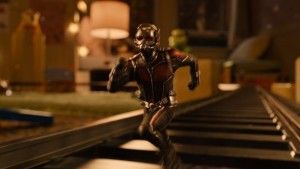 Although it is unmistakably from the Marvel stable, ANT-MAN is sometimes reminiscent of films from another of distributor Disney’s partners, Pixar. With its cheerful sense of goofiness and acute awareness of all the ways in which it can be absurd, ANT-MAN can feel, in a good way, like it comes from the realm of 3D CGI animation, even though the human parts are like action.

ANT-MAN is part of the AVENGERS universe, and indeed reminds us of this fact with dialogue, characters and set-pieces throughout. However, even a viewer unfamiliar with any of the AVENGERS movies (including those who are too young for the scarier devastation wrought by Loki and Ultron) will have no trouble figuring out what’s happening here, whether or not they recognize some old friends.

In a prologue, we see scientist Hank Pym (Michael Douglas) steadfastly refusing to turn over his research and inventions to the governmental agency S.H.I.E.L.D. Twenty-five years later, Pym has become something of a recluse, while his daughter Hope van Dyne (Evangeline Lilly) secretly spies on her fiancé Darren Cross (Corey Stoll) as he angles to take over Pym’s company. Stumbling into all of this is Scott Lang (Paul Rudd), a newly-paroled thief trying to go straight. Scott, who is pop-culture-savvy but no more scientifically inclined than most of the audience, tries to wrap his head around what’s happening when Pym offers him a job – which entails stealing. What it is that Pym wants stolen and who he wants it stolen from are astonishing enough, but it’s how he wants Scott to go about it that’s the real shocker. Pym has invented a suit – one he used to don himself – that can reduce its wearer to the size of an ant. More, the wearer can communicate with different types of ants.

From the way ANT-MAN unspools, director Peyton Reed and writers Edgar Wright & Joe Cornish and Adam McKay & actor Rudd, working from a story by Wright & Cornish based on the comic books by Stan Lee & Larry Lieber & Jack Kirby, are way ahead of any speculations on how this may look. The characters are self-aware enough to know there’s something a bit absurd about this method of saving the world, or mankind from itself, no matter how effective it is.

Both Rudd and Douglas excel at this in different ways. Rudd gives Scott a genial warmth and decency that allows the character to accept what’s happening because it’s the right thing to do, while Douglas gives his world-weary Pym a sense of irony – he’d be equally at home in, say, THE NEWSROOM, shaking his head at what fools these mortals be while still trying to rescue all of them. As for Stoll, he puts absolutely conviction into his grudge-bearing true believer Cross.

The special effects are persuasive. Especially commendable are Scott’s interactions with various types of ants and a finale that makes lively, epic use of some recognizable items that don’t normally serve these purposes.

ANT-MAN may have a hero who is often small, but the movie is always big fun.