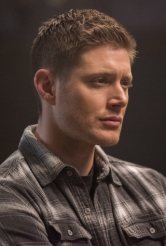 Good drama, though Crowley does converse with a hamster 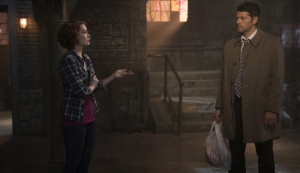 SUPERNATURAL combines real seriousness and real silliness in “Dark Dynasty,” a title that works on its own (as opposed to being simply a riff on another TV show or film, which sometimes happens here). We lose a major and well-loved (by most) character, we find out the resonant mythic background of the evil and influential Styne clan (hence the title); then again, we’ve got Crowley (Mark A. Sheppard) having a straight-faced conversation with a hamster. Okay, we know the hamster is really the witch Olivette, transformed by her rival, Crowley’s very angry mother Rowena (Ruth Connell), but even so, it’s one of those moments of jaw-dropping goofiness that makes SUPERNATURAL what it is.

When Styne first son and heir Eldon (David Hoflin) makes the mistake of first trying to rape a young woman who he then murders in order to steal her eyes, her screams create a witness. This creates a police case, which not only draws the interest of Sam (Jared Padalecki) and Dean (Jensen Ackles), but also incites the ire of Styne patriarch Monroe (Markus Flanagan). Monroe orders Eldon to track down Sam and Dean, who killed another Styne scion back in “Book of the Damned.” He also commands nephew Eli (Matt Bellefleur) to track down the redheaded woman – this would be Charlie (Felicia Day) – who may or may not still have the book in question.

In fact, since Rowena still hasn’t been able to translate the codex that can in turn interpret the book’s instructions on how to break the curse of the Mark of Cain, Sam begs Charlie to help use her computer skills to work with Rowena on decoding the codex. Sam also persuades Castiel (Misha Collins) to referee between Charlie and Rowena, who don’t get along. Sam also convinces Charlie and Cass not to tell Dean what they’re doing, which makes them uneasy.

Rowena points out to Charlie that her blind loyalty to the Winchesters will be her undoing. Charlie takes this as the bitter utterances of a wicked witch. Rowena’s continual chatter drives Charlie to the breaking point and she finally sneaks away from Castiel’s supervision.

Down in Hell, Crowley has his interspecies chat (he apparently understands Olivette’s hamster squeaks), which prompts him to tell his minion to track down whoever Olivette has named. Stay tuned on that point, as it’s not resolved here.

Dean goes out on a pizza run, is surrounded by Stynes, kills several of them, captures Eldon and brings him back to the dungeon at the Men of Letters HQ. After some persuasion from Sam and Dean, Eldon reveals that the Stynes are actually Frankensteins, with their fingers in every business on Earth. They also augment the men in the family – Eldon personally has two hearts, extra layers of skin and so on. He admits he’s personally expendable, but his family will just keep coming until they have the Book of the Damned back. When Dean tells Eldon the book burned, Eldon reveals that the book can’t be destroyed. Dean is furious with Sam for his subterfuge. By the time they finish arguing, Eldon has ripped off his own arm and escaped.

Charlie goes back to her motel room. Unfortunately, Eli has tracked her there. Charlie has decoded the codex and emails it to Sam. She calls the Winchesters when she realizes the Stynes have her location. Sam and Dean both tell Charlie to give the Stynes whatever they want, but Charlie smashes her computer rather than give up its secrets.

When Sam and Dean arrive, they find Charlie’s bloody corpse in the bathtub.

While SUPERNATURAL isn’t DEXTER (which has the closest cousin to the bathtub scene that comes to mind), that’s still quite a punch. We know Sam will blame himself, and Dean will blame Sam and himself. This really is sad on a lot of fronts. Charlie was a very likable (and useful) character and she was also one of the few well-written, well-acted continuing female characters in this universe. On the other hand, no human (and few supernatural entities) survives long around the Winchesters, and the Stynes need something other than numbers and a famous family name to seem menacing and hateful.

As to what’s going to happen when Dean confronts Castiel about his secret-keeping – and gets the full scoop on Sam’s deal with Rowena – that promises to be interesting. At this point, Dean may side with Crowley out of sheer outrage at Sam’s going behind his back and making a deal with Rowena, promising to kill the Hell King in exchange for help that Dean will abhor.

There is a lot of good work here from all parties concerned, with special praise for Hoflin, who makes a respectably hateful villain, and for Sheppard, who demonstrates that he really is game for any scene partner, no matter how furry, cute and preposterous.