Home » Bones review The Lost in the Found 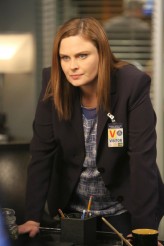 Astute about teen suicide, less so about regular characters 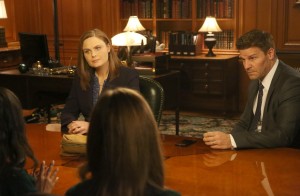 On the one hand, “The Lost in the Found” does a good job of exploring teen depression, bullying and suicide. On the other hand, in its tenth season, BONES chalks up a major fail by stretching credibility past the breaking point when it comes to our heroine Brennan (Emily Deschanel).

The main story in “Lost” concerns the death of Molly Delson, a prep school student whose remains are found by a large search party. After Booth (David Boreanaz) and Aubrey (John Boyd) first suspect a creepy fellow who admits to taking pictures of the underage girl, evidence leads to some classmates who were tormenting Molly, a bright student who seemed destined for great things at college. However, it turns out that Molly committed suicide, trying to frame the other girls for her demise. Brennan is hit particularly hard by Molly’s despair – Brennan too was the odd one out at high school, not fully grasping yet the rewards that her intelligence could yield in adulthood. Molly was so misunderstood and unheard that she was never able to leave her anguish behind and fulfill her potential; she died in misery.

This is one of BONES’ better efforts at being topical; it handles school bullying in a strong manner that integrates well with the show’s normal procedural workings.

However, where “Lost” indeed loses it is with a running subplot of Brennan insisting that she’s only three months pregnant when she appears much farther along. At last, Brennan checks and, in fact, she’s six months pregnant. Brennan is upset about this, and friend Angela (Michaela Conlin) offers the amateur psychological explanation that Brennan wants to put off enlarging her family because she knows how dangerous her work is and she doesn’t want to have more to lose.

Hold on here. It’s hard to know which aspect of this to address first – that Dr. Brennan, keenly in tune with her own body and all things biological, would be that far off on her own pregnancy or that husband Booth and already-born daughter Christine aren’t sufficient motivation for her to contemplate the effects of her job on her family. It’s an exasperating stretch to try to achieve an emotional response from the audience, with a completely flat result.

Then there is the dilemma of Daisy Wicks (Carla Gallo), mother of the child of the late Dr. Lance Sweets, who is trying to decide whether or not it’s too early to move on and start having sex with the cute guy she met at the gym. On the one hand, it’s a reasonable dramatic topic and Daisy is really the only character in a position to explore it. On the other, the sitcom handling of this subplot dampens any genuine exploration of the question without doing anything actually funny.

“The Lost in the Found” is one of those episodes where the procedural story is the one that works best, while the elements unique to BONES are lacking.