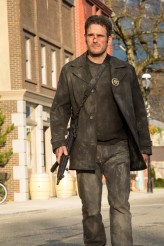 On Fox’s WAYWARD PINES, Thursdays at 9 PM, we’re in a small town that contains an epic, one might even say world-changing, secret. Based on a trilogy of books by Blake Crouch, WAYWARD PINES doesn’t try to keep us guessing for the whole of its ten-episode miniseries run. Instead, adaptor/executive producer/show runner Chad Hodge provides the big reveal at the halfway mark and seems to be spending the rest of the show investigating the many, many ramifications.

Hodge, who created the series THE PLAYBOY CLUB and worked on RUNAWAY and TRU CALLING, also is working on a biographical film about Anita Bryant, who fought against gay rights in the 1970s. He talks a bit about that project, as well as his behind-the-scenes governing of WAYWARD PINES.

ASSIGNMENT X: Which came first, the idea of the WAYARD PINES TV series, or the Blake Crouch novels? And how did your fellow executive producer M. Night Shyamalan become involved?

CHAD HODGE: I was sent the first original book three months before it was published, and I read it in about three hours. I was obsessed. And then I decided, “I don’t want to pitch this, I don’t want to have to explain this, I just want to write the script.” So I wrote the script on spec, then took it to Night. We attached Night, then we took the script out to the marketplace and we sold it to Fox. The second book was being written at that time, but it was not influenced by me at all. So all the episodes are based on Book 1, Book 2 and Book 3. There are a couple things that I came up with for the end of the series that did end up in Book 3, but it’s based on the books, not the other way around.

HODGE: He’s not planning any more books at the moment, but he and I are very close. He actually wrote two episodes of WAYWARD PINES. He did an incredible job. And we’re actually working on a new project based on another one of his books together.

AX: How open- or closed-ended is the end of the season?

HODGE: We are closed. It is an event series, it’s a ten-episode thing, it covers the territory of the three books all the way to the end of Book 3. Now, there are definitely elements in the three books that aren’t in the series and vice-versa, but in terms of the main story, it’s all covered from the first three books.

AX: If you did do a WAYWARD PINES Season 2, would you have to create another mystery as big as the Season 1 mystery, or would it just involve the surviving characters?

HODGE: There wouldn’t be a mystery as big as the Season 1 mystery, but it becomes the mystery of who these people are.

AX: Were you looking for a lead actor who carried noir with them?

HODGE: Absolutely. This show is actually very funny at times. It’s got a very strange sense of humor, and Matt is so perfect for that. He’s a dramatic actor, but he’s also a great comedian, so he was able to find that balance in the show perfectly.

AX: Do you and M. Night Shyamalan have a similar sensibility about the show?

HODGE: Yeah, definitely. We absolutely do. When it came to this project, we had a very consistent vision.

AX: What is the status of the Anita Bryant biopic that you’re writing?

HODGE: We are hoping that’s going to get off the ground very soon. We have Uma Thurman attached to play Anita and we have Rob Epstein and Jeffrey Friedman attached to direct it, so anyone who wants to give us ten million dollars …

AX: The project is not at HBO any more?

AX: Is your Anita Bryant going to sing “Come to the Florida Sunshine Tree”?

AX: What would you most like people to know about WAYWARD PINES?

HODGE: That there’s going to be a big payoff, but there are payoffs in every episode, and it’s not just about waiting for the truth. There are nuggets and things that happen every episode, and reveals, and even after the big reveal in Episode Five, it just becomes even deeper and more exciting.

This interview was conducted during The CW’s portion of the Television Critics Association press tour at the Langham-Huntington Hotel in Pasadena, CA.