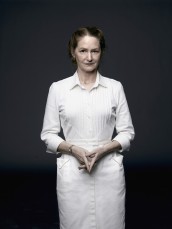 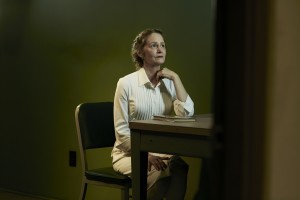 Melissa Leo won a Supporting Actress Oscar for her work in THE FIGHTER as Alice Ward, the real-life mother of prize fighter Mickey Ward, played in the film by Mark Wahlberg. Alice is a tough customer, which describes many of the characters played by the New York-born Leo, including her Baltimore police detective in five seasons of HOMICIDE: LIFE ON THE STREETS and her New Orleans flood survivor Toni Bernette in HBO’s TREME.

“Tough” is perhaps the mildest way to refer to Leo’s Nurse Pam on Fox’s WAYWARD PINES, Thursdays at 9 PM. Adapted by Chad Hodge from the books by Blake Crouch and executive-produced by M. Night Shyamalan, WAYWARD PINES explores a very unusual small town in Idaho. When Secret Service agent Ethan Burke (Matt Dillon) has an accident just outside Wayward Pines, he wakes up in a hospital ward. It seems Nurse Pam is perfectly comfortable with holding a Federal agent against his will, menacing people and even calling for public executions when she thinks someone is disrupting the local calm.

Those who have been watching WAYWARD PINES can attest to the fact that this is one show where the big secret really is a huge, unexpected revelation that hurtles the plot forward rather than ending it. At the time of this interview, Leo was still tasked with keeping the secret, so some of her answers are very careful to avoid spoilers.

ASSIGNMENT X: Were you looking to do an American television show right now, or is WAYWARD PINES just what came along?

MELISSA LEO: I have always, for thirty years, simply done what came along. And it was that case here. The luxury in the last handful of years [afforded by the Oscar win, is] taking a little more consideration. The opportunity to work with Matt Dillon, the opportunity to work with M. Night Shyamalan, that was very enticing to me. I went down to Pennsylvania and met with Night and Chad, and [after] that conversation, you couldn’t have torn me away from it. They were giving us the answers and it is so intriguing, very deep.

AX: Is your character Nurse Pam as similar to ONE FLEW OVER THE CUCKOO’S NEXT Nurse Ratched as she seems, or does she feel that she’s doing what she’s doing and how she’s doing it in order to protect the people around her?

LEO: I think you’ll watch the show and you’ll figure that out for yourself, but it’s a very good question. And I think that we all, from time to time, have a little Nurse Ratched in us, if it’s necessary.

AX: You tend to play people with a lot of backbone. Is that something that you look for in a role, or is that how you are cast?

LEO: I was born with a particular backbone, and I just bring that along with me when I work.

AX: Did you have to learn how to do anything for your work on WAYWARD PINES?

LEO: Suture. I got a suture lesson. I can cut and I can suture.

AX: Did they give you an orange or something to practice on?

LEO: Chicken skin and a nice nurse who came by and showed me how it was properly done.

AX: What is the most important thing that you had to discover or decide about your character?

LEO: It’s funny. In television, you can play in it, you can live in a character over time, and the character can grow and change. And I know it happened five years on HOMICIDE, I know it happened through the four-and-a-half years on TREME. Over time, I as a human being change, and the character grows and changes, too. I don’t know if that’s so much answering your question, but that’s what it makes me think about, is how there is opportunity to do that in TV, other than in a film, you start with the beginning and you’re getting to the end. I find all of it fascinating, I love working.

AX: Were you happy with the way TREME wrapped up?

LEO: It was hard to leave New Orleans. It was so hard to leave [the character] Toni Bernette. But I think in the end, David [Simon, who executive produced and co-created TREME with Eric Overmyer] amazingly got his arc in there, even though he had a lot less time to tell the story than he thought he would, and the repercussion I still feel from being a part of that amazing show down in that amazing city is an important part of my life, so the leaving was more a personal bittersweet than feeling we hadn’t accomplished what we set out to do.

AX: With Toni in TREME, for the most part, the audience and the character were seeing the same thing. Not so true, at least initially, with the character of Pam in WAYWARD PINES. Is there a working difference in those two things?

LEO: Yeah. There’s definitely a difference. Every job is different, every lady I play is different, but when you get into different genres, you really do get into some of the really fun parts of working. Work with Louis CK and make people laugh. Do something to make people laugh, and they laugh. Oh, it’s a remarkable feeling. Do something to kind of make people feel like they don’t quite know what’s going on, sci-fi, mystery, want to figure it out with you – it’s wonderful to play that game. And be straightforward and tell a factual story, a la Toni Bernette – that’s a fun thing to do, too. So it’s all got value.

LEO: I have a small role in the sequel to OLYMPUS HAS FALLEN, called LONDON HAS FALLEN, and that’ll be coming out next year.

AX: And what would you most like people to know right now about WAYWARD PINES?

LEO: Oh, I would really like them to tune in and watch it, and I wish that I could give them my phone number, so they could all call me and tell me what they’re thinking about it as it’s going along. I have a WhoSay account, and if people want to send in their responses as they are guessing at the show, learning the show, send them all to WhoSay.

This interview was conducted at Fox Network’s presentation day for the Television Critics Association at the Langham-Huntington Hotel in Pasadena, CA.