Home » 100 THINGS TO DO BEFORE HIGH SCHOOL interview

The actor talks his Nickelodeon series 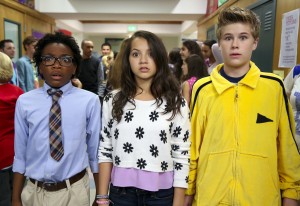 In Nickelodeon’s 100 THINGS TO DO BEFORE HIGH SCHOOL, Jaheem Toombs plays brilliant middle-schooler Fenwick Frazier, who teams up with best friends Crispo (Owen Joyner) and CJ (Isabela Moner) to accomplish some pre-freshman goals.

Toombs, who appeared on THE CAPE and MR. SUNSHINE and was a reporter for FTS KIDS NEWS, didn’t have time to answer a hundred questions, but he responded to a few.

AX: Did you have a lot of things you wanted to do before high school?

JAHEEM TOOMBS: I’m actually the only cast member who is not yet in high school, so I still have a bit of time. I would love to have a school lock as we do in [the episode] “Stay Up All Night Thing.” I have not yet stayed overnight at school, but I made new friends. One of my Number One goals was to get a Nickelodeon show. I also want to be in a Broadway show before I’m thirty.

AX: How would you describe your character Fenwick?

TOOMBS: Fenwick Frazier is the braniac of the school. He’s a genius, but he isn’t your average nerd. Fenwick is more of a sarcastic nerd. Which is me perfectly, because my second fluent language is sarcasm. Fenwick is dramatic, like me, and I wouldn’t say he’s too dorky. He has mini-freakouts, often especially when it comes to a grade anything lower than an A-plus. Fen’s Number One goal is getting into Stanford and “ruling the world some day.” He is pulled into these crazy situations and is petrified of getting in trouble. But he loves his best friends, so he sticks with them anyway. Expect lots of energy from this guy!

AX: Was there anything you had to learn in order to play Fenwick?

TOOMBS: It’s actually a bunch of fun. My character talks a lot, so in the beginning, remembering the lines was a tad difficult, but by Week Three, it was a piece of cake. I learn new words every day playing Fenwick. However, I can’t get Fenwick’s sophisticated lines perfect every take, so there will definitely be some funny bloopers.

AX: Did being a reporter on FTS KIDS NEWS help you at all as an actor?

TOOMBS: FTS KIDS NEWS was pretty much like any other entertainment-based news company, but kids were the reporters. I guess that project did help me a bit. Now, when I go on the red carpet – or should I say orange carpet – I kind of know what to expect because I got the chance to be on the other side of the mic.

AX: What would you most like people to know about 100 THINGS?

TOOMBS: 100 THINGS TO DO BEFORE HIGH SCHOOL is a show that the whole family can watch together. It’s an all-around wholesome show with a bunch of comedy, action and good messages. I’m excited to see what everyone thinks about it!