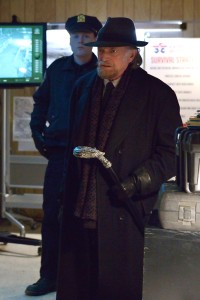 Actor David Bradley is dancing with the kind of gusto associated with Dickensian revels. His costar on THE STRAIN, Kevin Durand, is immortalizing the action with his cell phone. It’s perfectly appropriate – this is a party thrown by Fox and FX for the Television Critics Association press tour at West Hollywood’s Soho House and there’s music blaring – but whether one is most familiar with Bradley from his STRAIN role as determined and lethal vampire hunter Abraham Setrakian, the vile Walder Frey from GAME OF THRONES, actor William Hartnell aka the First Doctor Who from AN ADVENTURE IN SPACE AND TIME, Argus Filch in the HARRY POTTER films or some other project altogether, it’s an arresting sight.

Bradley, originally from Yorkshire, England, has been acting professionally since 1971, with a steady career on stage – he’s been nominated for an Olivier Award, the English equivalent of the Tony – and in film and television. He started getting international attention for his work in the POTTER movies and CAPTAIN AMERICA, but when Walder Frey hosted the Red Wedding, Bradley became instantly recognizable to huge swaths of the population.

THE STRAIN, the series created by Guillermo Del Toro and Chuck Hogan, currently in its second season on FX Sundays at 10 PM and renewed for a third, chronicles what happens when a breed of vampires known as the Strigoi take over first New York, then the world. It gives Bradley the opportunity to play a very new sort of character, not only because his Abraham Setrakian is a good guy and a concentration camp survivor, but also because he’s a full-on, sword-wielding action hero.

ASSIGNMENT X: Did you expect to be swashbuckling at this stage of your career?

DAVID BRADLEY: It was the last thing on my mind, the thought I would be – well, I’m seventy-three, it’s time I grew up, really – but it’s great, the fact that someone can write a series [with] action hero of my age. And I’m very grateful for it, because I spent several years with the Royal Shakespeare Company, where they very, very rarely put a sword in my hand and trusted me with it. So it’s nice to know that I can.

AX: Did the Royal Shakespeare sword training you got back then come in handy now, or did you have to train again?

BRADLEY: I had to be totally retrained, because I was probably a liability before I came here. Thankfully, Jamie Jones, who is the stunt coordinator on THE STRAIN, put me through my paces and reminded me what it takes to be a proper sword person. Before, I’d never been very good at it.

AX: Do you feel like you’re decent with a sword now?

BRADLEY: I’ve been trained well and I’m just feeling confident in the movements. It’s very technical and very physical and I actually enjoy it. I do whatever I can and I feel it’s within my capabilities. I don’t know what the Guinness Book record is for decapitation of vampires is, but I think I must be somewhere up there with the record [laughs].

AX: Are you enjoying the Van Helsing-ness of Setrakian’s character?

BRADLEY: Oh, yes, absolutely. I live in England, so I have yet to catch up with Series 2.I just enjoy all the little surprises that the writers come up with, particularly the idea that Setrakian is prolonging his life with a rather unusual cocktail, let’s say, that very nearly polishes him off. He finds an unusual way of keeping his youth, not out of any particular vanity to prolong his life, but in order to complete his mission. And I think the writers came up with something that was really a surprise to me, that Setrakian would resort to this method which is almost in league with the Devil, but it’s obviously very effective. So I just love the little twists and turns that the characters are making in Season 2.

AX: Giving that the two of you are hanging out together at this event, should we surmise that you’re enjoying working with Kevin Durand, who plays your ally Vasily Fet?

BRADLEY: Well, in Season 1, [the characters] formed a kind of alliance, but in Season 2, that is really solidified into a proper working relationship. We’ve become great friends off-screen. So it’s always a pleasure for me when I pick up a script and it says “Setrakian and Fet,” because I know we’re going to have a lot of fun. And I think Setrakian starts to realize fairly early on in Season 2 that this man is a most unlikely ally. I mean, who would have thought a year ago that a former English professor would hook up with a rat-catcher to solve one of the biggest problems that’s confronting the world [laughs]?

AX: How is it working with Guillermo Del Toro?

BRADLEY: He’s just an inspiring man, and I knew when he rang me up and asked me to do it, I just want to work with this guy, because he’d been an inspiration to me, having seen PAN’S LABYRINTH particularly. Any actor worth their salt would want to work with Guillermo. He’s just got this vision that can take something familiar and turn it completely on its head, like he has done with this. His vision of vampires is totally different from the Hammer House of Horror vision that we all enjoyed and thought was maybe a little bit camp in the Sixties and Seventies.  He has a totally different take on it, and I completely go along with it. And you just want to be part of his vision.

AX: You had a scene in the first episode of Season 2 with all of the Ancient vampires, who are bigger and scarier-looking than the regular vampires. How was that to shoot? Are you intimidated by how they look on set at all, or are you just thinking, “I feel so bad for those poor actors stuck under all that makeup”?

BRADLEY: No, I didn’t feel sorry for them at all, I just thought, “What a fantastic scene.” It was an underground [location], downtown Toronto, I can’t remember what it was called, but it was a cavernous place that they found. To find these places, the location managers do a brilliant job. And to see these creatures stood up on these pedestals, it was such a weird, weird scene to do. I just think it’s quite inspiring that Guillermo’s vision can encompass such big scenes like that, with such wonderful settings. You know when you set things in a room like that that it’s going to look great on camera. And as an actor, it raises your game, when you get a really good location like that and a really cracking scene. And the scene itself – what they did to the young guy on the chain, it was just horrendous. I was stood there just watching it all happen. And you know it’s going to look terrific onscreen.

BRADLEY: I sometimes feel sorry for the extremely professional dancers, they’re highly skilled people, who play the [new] vampires. When we’re out on the open street at three o’clock in the morning and it’s thirty-five below, I’m okay, I’ve got my big overcoat and my waistcoat and my jumper and my scarf and my fedora, so I’m fine, but some of those younger people who have to be out there in extreme conditions. I just admire them so much for their skill. And [their ability] to be quite scary. We’re just doing a job, we’re all in it together, we have a laugh, so I just think it makes you realize how many departments there are that go towards making something like this.

AX: Between playing William Hartnell and Walder Frey and Abraham Setrakian, you’re sort of in the rock star phase of your career now. How are you enjoying it?

BRADLEY: Oh, well, that’s very nice. [“Rock star” is] very apt, because last year, my son got married. And he wanted to form a surprise band for his wedding. He plays bass guitar, his brother plays drums, they had a couple of friends playing guitars, and I said, “Who’s going to be your front man?” And he pointed at me. So last October, I was living the dream of the wedding singer. And that’s all I want to do now, to be honest [laughs]. I had the time of my life singing at my son’s wedding. I don’t know what’s going to happen to Setrakian, but I know that I’m hoping for a few rock gigs to come up [laughs].

BRADLEY: I did an episode of something called BEOWULF, which we filmed on the northeast coast of England, based on the Nordic Viking saga, for ITV in England.

AX: And what would you most like people to know about Season 2 of THE STRAIN?

BRADLEY: I’d like them to know that, if they’ve seen Season 1, which was setting up the whole story, I like to think Season 2 expands it, takes it to another realm of imagination. A lot of the first season was taken up with in setting the story and introducing you to the characters. I think Season 2 takes it into another arena completely. You’ve still got the big, imaginative visual set pieces that were part of the first series, but you’ve got new characters and they expand the story, and the fact that the relationships shift and change. In my case, my journey with Vasily Fet is much more interesting. And the fact that there’s a kind of father/son relationship developing and burgeoning there, I really like that, because it lets me spend a lot more time with Kevin and exploring all those ideas.