The series creator/executive producer talks about his FX series 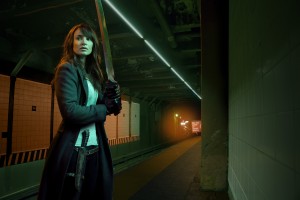 With writer Chuck Hogan, filmmaker Guillermo Del Toro has created THE STRAIN franchise three times – first as a trilogy of novels, then as graphic novels and now as the series running in its second season Sundays at 10 on FX Network, which has renewed the show for next year. Del Toro and Hogan both serve as executive producers on the chronicle of hive-minded vampires, called the Strigoi taking over New York City (and the world) under the command of a sinister Master.

Del Toro, acclaimed for PAN’S LABYRINTH, the HELLBOY films, PACIFIC RIM and more, wrote (with Matthew Robbins) and directed the upcoming feature CRIMSON PEAK. Del Toro has a background as an artist and practical special effects technician, which serves him to this day. Although Carlton Cuse is the day to day show runner on THE STRAIN, when Del Toro speaks to a small group of reporters, the filmmaker reveals that he’s a lot more hands on with his TV series than might have been guessed.

GUILLERMO DEL TORO: I did a lot of second unit that goes uncredited. I think that when a show has a show runner, you need to help him run the show, but he is the show runner. We plan the season together, we talk about the long arc, but I think shooting may be difficult. But frankly, I’m the most available director of the show. They call me within a week – they say, “Monday, can you shoot this?” I go, “Absolutely.” So I have shot stuff that is in the episodes. I shot obviously the black-and-white prologue of the Mexican wrestler, I shot the opening and I plan all the gory, brutal gags. A lot of my favorite gags we’ve done are coming up. I think people are just going to go, “What?!” I’m really, really proud of it.

AX: Was that one of the reasons you wanted to do a television show, to be able to do direct with greater frequency?

DEL TORO: It is strange, but the answer is actually yes, because I really love this position where they say, “Do you want to come and direct?” and I don’t have a nine-month prep. I can just go and I have a whole unit. It’s really fun – the crew likes me because I go in, I get the job done and I say, “This is second unit,” and already, the episode’s been shot. I know exactly what I need; I don’t do extra coverage. I send them home a little early [laughs].

AX: When you and Chuck Hogan were conceiving THE STRAIN, did you already know what you wanted the Strigoi to look like in all of their various forms?

AX: Do you draw them before you write about them?

DEL TORO: I’ve been drawing them for decades. They existed in my head since I was a teenager. I always wondered about vampire biology, and I always drew in my notebooks and in my doodles what the vampires would look like. And I knew history and European folklore, and I called them the Strigoi. Each country has a different vampire, and they are all very different. Chinese vampires, Filipino vampires, Mexican vampires, Greek vampires – Vrukolakos is a vampire from Greece, Strigoi from Eastern Europe, Upir is the Russian vampire, the Vurdulak is the Russian vampire, and so forth. So I’ve been doing that for awhile.

AX: As an artist, you’ve drawn things your whole life, but now, the last ten or twenty years, you’ve had other artists who’ve brought those drawings to life for you to see. How does that feel?

DEL TORO: It’s really good. I mean, I tell people, “Look, when you see my notebooks, and when I started in the Nineties, I was drawing ten pages of drawings for fifteen, twenty pages of notes for each project. Now I draw four or five, because the bulk of the drawings I’ve done with Guy Davies, Mike Mignola, Oscar Cicconi, all the people that I collaborate with. And they are much better artists, so I have the luxury of working closely with them. I still draw, but it’s less and less for every project.

AX: Speaking of Mike Mignola, who created the HELLBOY comics, is there any status update on the film HELLBOY III?

DEL TORO: The same status. I think that the fans want it, we want it, but studios – it’s a big movie, bigger than the first one and the second one. And the numbers on the HELLBOYs made a lot of sense because of video. HELLBOY II exists not because a studio head said, “I’m a big fan.” The first one made money, made much more money on the Blu-ray and DVD than it did theatrical, but it made money, so they went at it. Now that market is gone. 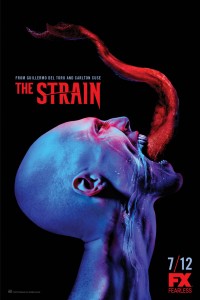 DEL TORO: [Yes], but we live in an era where getting those exact numbers is still not that easy. I think that by the time you catch up with the numbers, the platforms have changed.

DEL TORO: That’s related to [FX Network CEO] John Landgraf’s note for the season. He shared our love for Quinlan [played by Rupert Penry-Jones] as a character. We were talking and he said – I don’t want to give spoilers, but there is a Roman flashback.

AX: You’ve said that you worry about having all of the characters moving from here to there together looks like SCOOBY-DO. Did you know that in BUFFY THE VAMPIRE SLAYER, they actually referred to those kids as the Scooby Gang onscreen?

DEL TORO: I didn’t know that, but it really feels like that sometimes when you move large groups.

AX: What would you most like people to know about Season 2 of THE STRAIN?

DEL TORO: Well, I think that since we set up the world in the first one, I think we’re having fun on the second one. So hopefully they will have fun with us.

This interview was conducted during FX’s presentation for the Television Critics Association at the Beverly Hilton Hotel.