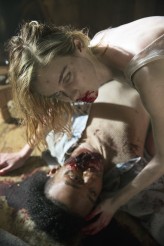 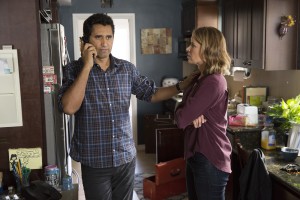 The interesting thing about the world of THE WALKING DEAD and it carries over to the spin-off show FEAR OF THE WALKING DEAD is that it exists in a universe where there have been no zombie movies or zombie lore. Because obviously they wouldn’t be nearly as confused as they appear to be when first seeing the dead come back to life, let alone attack and kill people.

Otherwise wouldn’t they just say “You have to destroy the brain, have you never seen a George Romero movie?”

Much like the first few episode of the original series, the first episode of FEAR THE WALKING DEAD is more about the discovery of said zombies rather than running from them. Zombies exist? Holy sh**, now what?

Because FEAR takes place at the very beginning of the zombie apocalypse, everything is new. And this is compounded by this not knowing how zombie lore works. That once a zombie bites or kills another person, that person becomes a zombie and gets up and walks away. So when Travis (Cliff Curtis) and Madison (Kim Dickens) go to the church and don’t find any bodies, well, naturally they got up and walked away to stalk someone else. But they don’t know that. Because a freaking zombie apocalypse? Never happening, no matter how much Nick (Frank Dillane) says he saw a chick eating another person and there is a leaked video of a dead guy getting up and getting shot by a thousand bullets and keep coming.

Also because it is a new thing and the zombies are “fresh,” they look fresh and are not severely decomposed as the zombies we see from the start of THE WALKING DEAD. That’s a cool thing and a refreshing take on the genre.

The other thing that’s cool is that we see how the world reacts to the beginnings of this zombie apocalypse and how most services, work jobs and life is basically the same. Kids have issues with relationships. Parents have issues with relationships and their kids. Work is there and you must juggle all these things along with it. Yet, there is this underlying feel that something is happening. There is a “sickness” that is impacting school attendance and the workplace. School is getting cut short because of things happening in the world – such as the leaked video. But overall things are basically the same.

Now, that changes quickly for Madison and Travis when they must track down Nick, who after discovering people eating others in a drug church, get hits by a car and goes to the hospital only to escape the hospital and avoid his family. After Nick kills the man who was hooking him up with drugs, Travis and Madison rescue him and they go looking for the dead guy that is obviously now up and moving. When Nick runs him over a few times, he is still dead-alive and they are bewildered by what is happening as the credits roll.

What makes FEAR THE WALKING DEAD even more interesting is that there is no material to base the show on. As much as THE WALKING DEAD is different from the comics in a lot of ways, it is also extremely similar and follows the comic book in more ways than non-comic book readers probably think. So, we know about the Governor. We know about Alexandria. We know about the deaths of many of the characters and how they happen. Here, I have no clue what will happen or what fate awaits which characters or what plotline they may be involved in. That insecurity in a show is also refreshing (even if how things shake out in THE WALKING DEAD quite differently at times).

Given this, the cast of new characters to follow, a non-Ricktatorship and being able to see the world implode from the beginning makes FEAR THE WALKING DEAD extremely interesting and will hopefully be something very fun to watch.