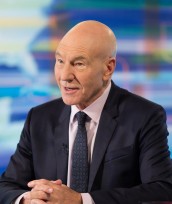 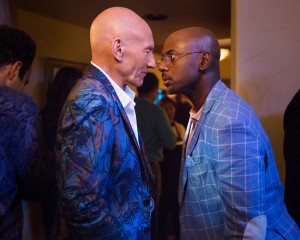 In Starz’s new Saturday-night half-hour comedy BLUNT TALK, premiering August 22 at 9 PM, Patrick Stewart stars as news host Walter Blunt. Walter wants to use his show to help the American people, but he needs a lot of help himself. For one thing, Walter keeps winding up on the news – for example, a tryst with a young lady in his car winds up with Walter hitting a police officer. Walter relies hugely on his loyal staff – especially manservant Harry (Adrian Scarborough) and producer/manager Rosalie (Jacki Weaver).

Jonathan Ames, who previously created BORED TO DEATH for HBO, is BLUNT TALK’s creator and executive producer, alongside Seth MacFarlane. During a Q&A session for BLUNT TALK and members of the Television Critics Association, Ames demonstrates his “Hairy Call,” a unique sound that is memorable, though not something that transfers well to print. “Before every table read,” Ames explains, “I would make this sound that my friends and I would make when being attacked by more normal children. It would kind of clear the air, like striking a bell at the beginning of a Buddhist ceremony.”

Following the panel, Ames takes time for a bit of follow-up blunt talk about his new series – and about the Hairy Call.

AX: How do you make that sound?

AX: Why is it a Hairy Call?

AX: When did you come up with the idea for BLUNT TALK?

AX: What’s the collaboration like between you and Seth MacFarlane? Or did he just bring you in and said, “Go with God”?

AMES: A little bit of that. He’s very much a matchmaker between myself and Patrick, and then just has been an enthusiastic supporter and cheerleader for what we’ve been doing while he’s managing many shows and things like that, so he’s been a wonderful source of support.

AX: Does Patrick Stewart have a lot of input into his character?

AMES: Oh, yeah. We confer a lot and talk and he has ideas.

AX: There’s a dream sequence where Walter sees himself as a child. Does Walter in waking life see himself as a little boy?

AMES: I don’t know that he does, but Patrick has said that there’s something about the character – I’m probably personally very arrested myself, so it might come through that the characters are all somewhat infantile, but I think that’s his innocence.

AX: Are you parodying any specific news show with Walter’s on-air broadcasts, or is it more general?

AMES: This is more general. I mean, we kind of draw upon Anderson Cooper, Bill O’Reilly, Rachel Maddow – we took a look at all of them. It’s that kind of news show, where he does interviews, covers the news, does all sorts of things.

AX: With the relationship between Walter and Harry, who has been with him since Walter was Harry’s commanding officer in the Falklands War, are you referencing those Thirties movies with the officer and his manservant?

AMES: My frame of reference is mostly the short stories and novels of P.G. Wodehouse, specifically the stories involving Bertie Wooster and his manservant Jeeves. And I had also read in some crime story about an ex-German officer and his manservant who had served in the war with him. So that was another basis. But I’m not looking at any Thirties films, I’m referencing Wodehouse.

AX: Jacki Weaver is actually Australian, but is playing a New Yorker. Was there any thought of letting her use her real speaking voice?

AMES: There was some thought of that, but we had Patrick with an accent, Adrian with an accent, Dolly [Wells, the English actress who plays BLUNT TALK staffer Celia] with an accent. And I think Jacki wanted to do a New York accent, so that’s what we did.

AX: Do you have the most fun with the more insane aspects of BLUNT TALK or the more down to Earth or the more almost tragic aspects?

AMES: I guess I enjoy all of it. I like our moments of drama, because it’s good actors, to see how they pull that off. I like when they’re doing the dialogue and it’s working. And then I like seeing the physical humor. Sometimes that can be difficult, though, because you don’t have that much time or you need stunt people. But I like all of those things.

AX: And what would you most like people to know right now about BLUNT TALK?

AMES: That they’ll see Patrick Stewart in a way that they never have before and that hopefully they’ll be entertained.