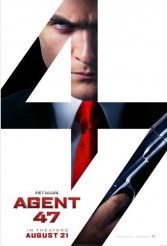 An improved reboot of an action videogame adaptation 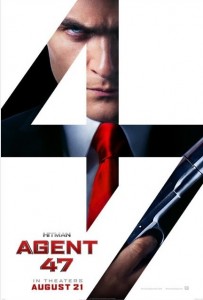 2007’s HITMAN, based on the Eidos Interactive videogame, was no great shakes. It wasn’t incompetent, but it seemed to suffer from an internal struggle, wanting to be a movie, but clinging to its less plot-and-character-driven roots.

Now HITMAN: AGENT 47 is here. The good news is that it’s definitely a movie, and one with some decent plot twists and even character arcs, not to mention some impressive vehicular action and stunt choreography. It also has strong actors in the lead roles and gives us some stunning exteriors in Singapore and Berlin. The bad news is that, like a number of its main characters, while yearning for human connection is visible, it favors function over genuine emotion.

Two minutes of voiceover tells us what will be reiterated later on, which is that the “agent” program created enhanced assassins, chemically altered from before birth to be faster, smarter, oblivious to pain and love. The program was closed down, but some agents are still out there. Agent 47 (Rupert Friend) is tracking Katia (Hannah Ware), a young woman who clearly has some superior skills of her own, including a head for numbers and an ability to hide. We see what Katia sees, whirling shreds of memory, as she is on a quest to find a man she doesn’t know. Then John Smith (Zachary Quinto) shows up, offering to protect her from the pursuing Agent.

It is difficult to go into what happens after this point without getting into spoiler territory, except to note that trusting one’s instincts will be vindicated. A great deal of combat – hand-to-hand, gun, explosive, cars and more – occurs as the chase moves from building to building and country to country. There are a lot more clever flourishes than that expository opening would suggest, and even some character soul-searching on what it means to be human. This doesn’t get as deep as it could, but Ware plays Katia’s inquiry with conviction.

Friend has powerful presence and Quinto has intensity to spare. Thomas Kretschmann plays his fairly rote character honorably and Ciaran Hinds provides some unexpected humor late in the running time.

HITMAN: AGENT 47 looks to be a reinvention rather than a sequel, given that Timothy Olyphant played “Number 47” in the earlier movie and he had a somewhat different trajectory than Friend’s Agent 47 here. The changes in mythos, character and methodology are all for the best. Yes, there are better action thrillers out there, but at least HITMAN: AGENT 47 does feel like an actual film, with attention to detail from writers Skip Woods and Michael Finch and the ability to build narrative and momentum through imagery from director Aleksander Bach. If it’s not the last word in enhanced evolution, at least it’s a legitimate participant in this summer’s conversation about diverting film making.