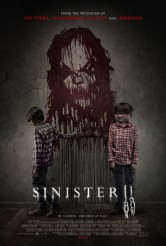 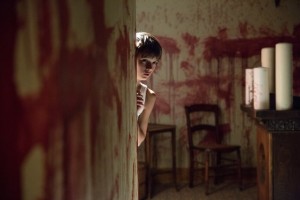 The original SINISTER, released in 2012, was a very good, creepy horror movie. Its writers, Scott Derrickson & C. Robert Cargill, have scripted a sequel, SINISTER 2, that maintains the mythology while shifting the point of view around to do something new.

There are meta reasons – that is, if one starts guessing why certain narrative and stylistic choices may have been made – that make this go-round a little less scary. Still, it has the prickliness of the “home movies” that are part of its mythos, which remain nasty and chilling. Furthermore, this is a sequel that actually respects the audience; exposition is kept down to what’s necessary. Also, SINISTER 2 gets points for being perhaps the least pretentious film in memory to have a hero with no name.

That would be (as he’s referred to in the credits) Ex-Deputy So-and-So, played by James Ransone, the lone returning cast member from the original SINISTER. Ex-Deputy clearly has a name, and he doesn’t seem like the ultra-enigmatic type, but there’s never a moment when he’s called on to introduce himself as the action goes plunging along.

Ex-Deputy figured out in the original SINISTER that the boogeyman Bughool somehow causes family massacres, always with homemade films of the killings surfacing and one child missing afterwards. When a new family moves into the home of the previous victims, Bughool begins terrorizing them, but doesn’t actually strike until the distraught people pick up stakes and move to another house, where they are slaughtered.

Ex-Deputy, who seems to have grown a more robust conscience since we last saw him, is now a private investigator. In his spare time, he locates and burns down houses where Bughool was active, thereby saving unknowing families from walking into the curse.

However, when Ex-Deputy shows up to burn down an isolated house he believes is empty, he encounters Courtney (Shannyn Sossamon), on the run with her twin sons Dylan (Robert Sloan) and Zach (Dartanian Sloan – in real life, the boys are fraternal triplets with a sister). Courtney’s estranged husband Clint (Lea Coco) is a bullying monster of the strictly human kind. Ex-Deputy wants to protect Courtney and the boys, but he’s having trouble explaining that Clint is the least of their worries. Meanwhile, Dylan is experiencing nightmares, ghostly visitations and a film festival of horror in the basement.

SINISTER 2 is a little more straightforward than its predecessor, where the protagonist (Ethan Hawke) was keeping secrets from his wife in order to advance his career. Here, Ex-Deputy is a genuinely decent fellow doing his best to combat supernatural evil, and Courtney is mostly sympathetic, so there’s less moral ambiguity. There is still plenty of dark, clever puzzle-solving, with a radio that could make a great Steven King book cover and short but potent bits for the straight-out gorehounds in the audience (non-gorehounds, be warned).

Ransone brings goofy likability to Ex-Deputy. Sossamon is vulnerable and maternal in a somewhat underwritten role. Both Sloan youths give strong and distinct performances.

SINISTER 2 doesn’t rise to the level of classic, but it is an effective continuation of the original, spooky enough to rank as a very decent horror outing.