diary of a teenage girl review 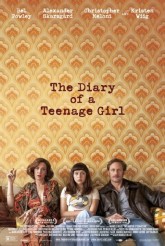 © 2015 Sony Pictures Classic
THE DIARY OF A TEENAGE GIRL
Reviews

Movie Review: THE DIARY OF A TEENAGE GIRL 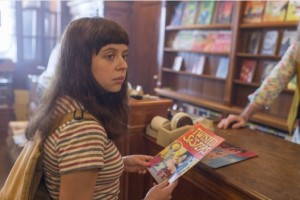 It’s easy to imagine that THE DIARY OF A TEENAGE GIRL. Those who find it true to their own experience, metaphorically (and possibly though not necessarily literally), are likely to love it. Those whose teen years went in completely other directions may still be intrigued, but could equally be disbelieving, alienated and/or bored.

For those open to its appeal, THE DIARY OF A TEENAGE GIRL is full of rueful insight and empathy. It also has a timeless quality, though it is set very specifically in 1976 San Francisco. Minnie Goetze (Bel Powley) is a smart, slightly melancholy middle-class Jewish fifteen-year-old, living with her insecure mother Charlotte (Kristen Wiig) and little sister Gretel (Abby Wait) in an apartment, where they’re supported by Charlotte’s psychiatrist ex Pascal (Christopher Meloni).

Minnie is a budding cartoonist, whose artwork frequently comes to life as she works on it or thinks aloud for us. When we meet Minnie, she is contemplating the fact that she’s just had sex. As it is for many teens, this is a source of pride and power for Minnie. However, there aren’t many people she can talk to about this, so Minnie confides everything to a succession of cassette tapes that she keeps in a box under her bed (this detail goes exactly where one might expect). Unfortunate for all sorts of reasons, Minnie’s first partner, who she thinks she loves, is her mom’s handsome but irresponsible (and appalling) boyfriend Monroe (Alexander Skarsgard). For reasons that include actual desire, a wish to see if she can enjoy the act with someone other than Monroe and wanting to investigate her own power, Minnie has a number of sexual partners. With Charlotte’s self-involvement and Pascal at a distance, it takes awhile for anything resembling emotional support to appear on the horizon.

THE DIARY OF A TEENAGE GIRL is based on the novel by Phoebe Gloeckner. The film’s writer/director Marielle Heller previously adapted DIARY as a stage play. She makes the film so that we feel like we’re in Minnie’s skin – Powley’s wonderful performance is a crucial factor here – allowing us to participate in the giddy, the cringe-worthy, the investigative and the reflective aspects of life as though they’re all happening to us. There’s no external judgment; Minnie can’t be expected to have opinions on experiences that are foreign to her before she has them.

There’s also empathy for the distracted Charlotte, played by Wiig with a sadness that keeps us from viewing her too darkly. Empathy is perhaps too far a reach for Monroe, but Heller and Skarsgard, who is fearlessly smarmy here, at least show us how the jerk rationalizes his own behavior.

Heller and her onscreen Minnie never lecture, but are tremendously illustrative in terms of both state of mind and the sorts of incidents that can occur as the result of curiosity and opportunity. THE DIARY OF A TEENAGE GIRL emerges not as a cautionary downer, but as a story of finding the ability to speak for oneself. If one finds the film immersive, it provides a measure of joy at its conclusion.