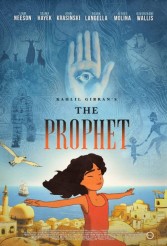 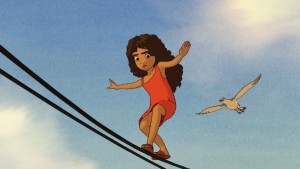 There’s no question that KAHLIL GIBRAN’S THE PROPHET is an admirable enterprise in its visual scope, its differing animation styles and its international nature. However, it’s pitched as a children’s film. As such, it feels much more like a lesson and less like entertainment. Conversely, adults who may well respond to the flights of optical creativity and imagination that accompany Gibran’s soaring poetry are likely to find the framing device of primary writer/director Roger Allers’ story exceedingly earthbound.

Within the universe of the film KAHLIL GIBRAN’S THE PROPHET, the famed poet’s writings and art are the work of the fictional Mustafa (voiced by Liam Neeson). Mustafa has been under house arrest on a junta-ruled Mediterranean island for seven years. He is loyally tended to by Kamila (voiced by Salma Hayek), whose rebellious little girl Almitra (voiced by Quvenzhane Wallis) hasn’t spoken a word in two years.

Several things happen almost simultaneously. Almitra sneaks into Mustafa’s house, Mustafa befriends the child and the junta grants Mustafa a pardon and offers to send him to his home. However, the pardon carries a hefty price – Mustafa must denounce his writings and beliefs in order to be released. If he refuses, not only will Mustafa not be pardoned, he will be executed as a traitor.

As Mustafa is taken through the town, he is met by many admirers among the humble citizenry. He has a poem for just about every occasion.

Here is where THE PROPHET is at its most energizing. Each poem gets its own segment, directed and produced by a separate team. Neeson as Mustafa recites Gibran’s poetry, with some also set to music by Damien Rice, Glen Hansard and Yo-Yo Ma, among others. The styles are rapturous, sometimes primitive, sometimes flowing, mostly testifying to the inspirational link between spoken word and visual art. The segments are by turns lovely, joyous, moving and simply unreal.

The animation in the wraparound story is a different matter. Here, standard and not especially expressive 2D animated characters play out against beautifully drawn but static backgrounds. The limited feel of this approach is felt even more keenly in the narrative, which is filled with characters who are types rather than people: saintly, mischievous, motherly, petty, worshipful. This is one of those movies that wants to be fun but doesn’t know how to achieve it, for fear that any real movements in that direction may overshadow its message. Kids (and grown-ups, too) are all for learning while they are being entertained, but when the entertainment value is ersatz, the lessons can largely be lost along with the enjoyment that seldom materializes.