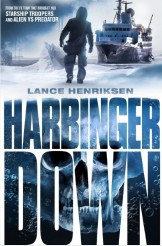 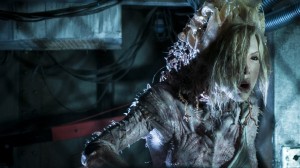 A practical effect used in HARBINGER DOWN | © 2015 Vertical Entertainment

HARBINGER DOWN is a pretty blatant rip-off of the John Carpenter classic THE THING.

However, the people who made the film – on the back of a successful Kickstarter campaign combined with funds from their own pockets – make clear that’s what they were going for in a homage to not just THE THING but also other science fiction monster movies from the 80s including LEVIATHAN and even a bit of ALIEN.

The film begins on board a crab fishing boat off of Alaska where a research crew is tagging along to discover the effects of global warming on Orcas in the ocean. They bring aboard a frozen craft that has been in the water for decades and discover it is a lost Russia spacecraft. Quickly, things turn south when it thaws, naturally, and a gnarly creature begins hunting the crew and the researchers. But this alien or Russian experiment or whatever is one mean son of a bitch that has the ability to replicate parts of itself and infect numerous people at the same time. Sound familiar?

Part of the hook of HARBINGER DOWN is that all of the creature effects were done using practical effects rather than CG. In an age where nearly everything is CG, it is a refreshing take on the horror genre. The trouble is when we see practical effects, there are in short duration. Whereas something like THE THING had major awesome moments where the creature splits from one of the humans and reveals its true nature. In HARBINGER DOWN, we see the creature in short bursts but usually in the dark, hidden from any keen observation and there are no “wow” moments where they shine.

Still, it is a cool thing to know that what you are seeing was used with miniatures and from actual blood, sweat and tears rather than some dude behind a keyboard – which is not a knock against those people just a nice change of pace.

The story itself isn’t original, obviously because it lifted the plot from THE THING right down to it taking shape of humans (in a way) and a huge creature forming together at the end. But taking place completely on a boat, leaves little room for any complex plot devices other than the cold, ice and cramped quarters. Also HARBINGER DOWN doesn’t have the paranoia that THE THING does, which is half of what makes that film so outstanding.  When MacReady is accused of being infected and he goes on the run and then captures all the remaining Antarctica personnel and ties them down to find out who is indeed who, it is a powerful and fun moment. There is nothing like that here instead it is pure survival against something that isn’t hiding but coming straight at them.

Lance Henriksen is the main draw of the actors and he does is usual journeyman job but the rest of the cast is made primiarly of nobodies and it shows in their reactions and line delivery. Camille Balsamo may also be familiar in that she stars in MURDER IN THE FIRST and has been in a handful of movies but even she suffers from poor delivery and timing.

But acting isn’t what this film is billing and it is more about the practical special effects. So if that is something you enjoy, this will warm your cold, dark heart that has been poisoned by the mass amount of CG in the genre.

HARBINGER DOWN is in limited theater engagements and on video on demand everywhere.