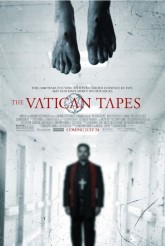 The acting and practical effects are good, the story is not 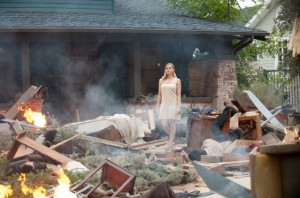 Exorcism films run the gamut. At the high end, there’s the William Peter Blatty/William Friedkin 1973 classic THE EXORCIST and more financially modest but tremendously effective efforts like THE LAST EXORCISM. At the low end is some truly astonishing schlock. THE VATICAN TAPES is well-made enough to stay out of the latter category, but as an exorcism horror film – or any sort of film, for that matter – it still qualifies as a mess.

After an onscreen note informs us that the Vatican is concerned about incidents of demonic possession and see tapes of exorcisms that are purportedly part of a secret library of such things, we are then introduced to Angela Holmes (Olivia Dudley), a pretty, young American woman whose primary goal at the moment seems to be preventing her religious and military officer father Roger (Dougray Scott) from becoming overly stern with her boyfriend Pete (John Patrick Amedori).

So far, apart from being derivative, this sounds neither better nor worse than most other exorcism movies. Ah, but the devil is not only in the victim, it’s in the details. The reason for why Angela has been specifically targeted for what she’s going through is first of all delivered in one of those giant hairballs of exposition that gets virtually no dramatic buildup until one of the actors delivers it with commendable professionalism. (The cast does their best with the material.) This notable structural flaw is superseded by the exposition itself, which is jaw-dropping in so many different ways that, for a moment, it seems that perhaps THE VATICAN TAPES is meant to be a genre parody.

Any movie would have trouble recovering from this, but THE VATICAN TAPES has nothing to fall back on – not plot momentum, not characterization, not even good scares. The more the screenplay insists that there are dire consequences here, the less persuasive it gets. Some of the special effects are cool, but they don’t compensate for the surrounding lack of drive.

By the conclusion of THE VATICAN TAPES, it seems as though the filmmakers are angling for a sequel, but it will be hard to make audiences care what happens next without making them first care about (or at least take seriously) what happens in this one.