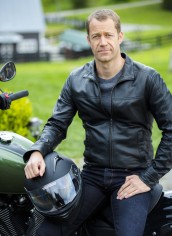 The actor also chats about real-life fatherhood and missing EUREKA 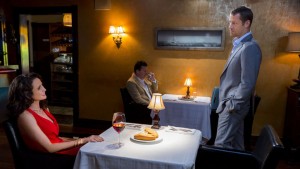 The title small town in Hallmark Channel’s CEDAR COVE, Saturdays at 8 PM, is usually a pretty friendly place. However, things in the close-knit burg may be getting competitive with the arrival new district attorney Paul Watson, played by Colin Ferguson. Paul, it seems, is interested in Judge Olivia Lockhart (Andie MacDowell), just when she’s having some issues with boyfriend Jack Griffith (Dylan Neal).

Ferguson is fairly visible these days to anyone with commercial TV, thanks to his gig as the Maytag repairman in a series of ads. He’s also got a following from his five seasons as Sheriff Jack Carter on EUREKA; he’s also had recent guest stints on HAVEN and THE VAMPIRE DIARIES. The Quebec-born actor, now living in Los Angeles, directed several episodes of EUREKA and the Syfy Channel film TRIASSIC ATTACK. However, conversing with Ferguson at a party thrown by Hallmark Channel for the Television Critics Association at a Beverly Hills estate, he makes it clear that his most important occupation is his real-life role as father of his young son.

AX: CEDAR COVE is set in the Pacific Northwest and shoots in Vancouver. After EUREKA and HAVEN, were you looking to continue working in Canada?

COLIN FERGUSON: [laughs] No. That was lucky. I did ten episodes of HAVEN, and that was in Halifax, and that was just too far [from Los Angeles], because I have a two-year-old now. So that was a no-go. So when this came down the pike, they work days, it’s eleven-hour days, it’s the same time zone, it just made it really, really viable. Coming off EUREKA and HAVEN, to do a show where there’s no vis effects, no special effects, none of that stuff, it was really refreshing.

AX: It seems that Paul’s main story purpose in CEDAR COVE is to provide the third corner of a romantic triangle. Do you psych yourself into, “I am a romantic threat,” or just, “I am interested in Andie MacDowell’s character and the rest will come naturally”?

FERGUSON: Andie and I just got lucky because we got along, sort of right out of the gate, and that’s always a bit of a concern. Because as the new guy, and [as the love interest] for someone who’s as famous and beautiful as Andie is, if we don’t get along, I’m not hanging around very long [laughs], they’re going to get rid of me. But we did get along famously, and so it just worked.

AX: And you’ve done some directing …

FERGUSON: Yeah, I directed a movie for Syfy, I directed an episode of HAVEN, I’ve been directing a little bit.

AX: How are you enjoying that? Are there things you’ve learned as an actor that help you as a director?

FERGUSON: Absolutely. Unlike other directors, as an actor, I’ve had the opportunity to work under hundreds of other directors. We get to see hundreds of other people go through their entire process, so it’s an amazing school if you’re paying attention. What I love about it is, you get to affect the final product from the very beginning. You get to protect the actors, you get to protect the story, you get to go through all of it. As an actor, you get in at the eleventh hour. You show up on set and a lot of the decisions have been made. “Oh, we put this over here and we put that over there.” Well, you can’t change it now. As an actor, sometimes you go, “Yeah, but how is this line going to work?” And everyone goes, “Oh. You’re right, that’s not going to …” So I love directing. I found it very difficult with a son, because you don’t see him. You’re first in and last out. So I’m very careful about how much of it I do.

AX: Would you be able to both direct and parent without Skype?

FERGUSON: I bring him. He’s up with me where I go. But no. I mean, face-time, Skype. Because he’s young enough that he doesn’t understand that I’m not even there.

AX: So he just thinks Dad is sitting there in the box?

FERGUSON: Yeah. He carries the phone and he puts me on the piano and he plays me a song and carries me around and puts me next to the toys and we play that way. So I want to maintain that level of intimacy with him, and if it means I don’t work that much, that’s fine.

AX: So when you go from where you live in L.A. to work in Canada …

FERGUSON: Yeah. Vancouver’s fine, because it’s a two-and-a-half-hour flight, and I can go for three days, and I don’t mind that, but if it’s the East Coast, that gets tricky, because to cross the country is a full day with the flight and the time. So long story short, he’s on my mind, and that’s the way it should be.

AX: Are most of your fellow actors on CEDAR COVE parents as well?

FERGUSON: A lot of them. And people deal with it differently. The people who have older kids, they have the luxury of disappearing for a couple of weeks at a time, and it doesn’t really ruffle any feathers. The trouble is, they say it’s harder on those [older] kids, because they understand, and they say, “You’ve got to come home.” They have enough acumen to put together an argument.

AX: How is Hallmark Channel to work for as an organization?

FERGUSON: So appreciative, so kind, so generous to me. When you get a group of people that are that vocal about how much they appreciate you being there, it’s kind of hard to not say yes to whatever they want [laughs].

AX: Do you miss EUREKA?

FERGUSON: Oh, yeah, absolutely. I miss those guys. I still see everybody from the show. We had a lovely, lovely working relationship. I miss the crew. That crew was tight. We used things, we did things on that show that I have yet to be able to do on another set in the time we did them. We were like a SWAT team, how quickly we could move, and I miss that level of knowledge. Everybody knew everybody. That crew had been together for fifteen years. I think they came off of DEAD ZONE and then they did also OUTER LIMITS. So to have that level of professionalism – no one expected the moon every week, but we pulled it off. So I miss them.

FERGUSON: Because I stayed far longer and deeper on the show [CEDAR COVE] than I initially thought I was going to, I’ve taken some time off now and I’m back in town with my son.

AX: What would you most like people to know about your work on CEDAR COVE?

FERGUSON: That I think my character’s a good guy. And that I think he’s a nice guy. And from an acting standpoint, I did my best to have fun with every scene that I did. So I hope that comes across.