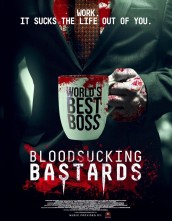 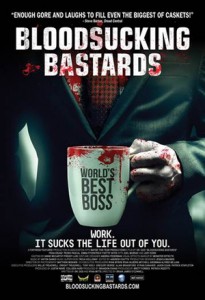 BLOODSUCKING BASTARDS combines the usual horrors of a dull office sales job – useless products, bored and uncooperative coworkers, a stressed-out boss – with a different kind of scare. What if your old college nemesis swooped in, got the promotion you’d been striving for and was a vampire?

This is the situation that confronts our hero Evan (Fran Kranz). Up until now, Evan has been good-natured and dutiful, but now he must stiffen his spine and fight back.

Although the framework is not exactly new, the specifics are unique, and for awhile, BLOODSUCKING works on the strength of its depiction of a dispiriting workplace. It also boasts not only the highly likable Franz, but also Pedro Pascal, expert as his smarmy supernatural adversary. Both actors are genre veterans – Franz costarred in CABIN AND THE WOODS and DOLLHOUSE, while Pascal, almost unrecognizable here, was the late, lamented Oberyn Martell in GAME OF THRONES.

So what goes wrong? For a start, it comes as something of a shock to realize that writers Dr. God (the name of an improv troupe) and Ryan Mitts and director Brian James O’Connell intend for us to actually like Evan’s apathetic, mean-spirited coworkers. The characters are such jerks that it seems like we’re being primed to cheer on their demises rather than worry about their survival. There’s a very fine line to this type of comedy, and BLOODSUCKING BASTARDS falls over on the side of hitting the same slack-is-hip note too many times.

Then there’s the romance that needs repair between Evan and his colleague Amanda (Emma Fitzpatrick). Amanda is written as such a standard horror movie/frat movie object of desire that, although Fitzpatrick makes a valiant effort, there’s no adding dimension to her. She’s attractive, she’s smart, she doesn’t believe the warnings Evan tries to give her for the longest time. Kranz and Fitzpatrick are completely engaged with one another and with the material, but so little imagination has been expended on the creation of Amanda’s character that the film slows to a crawl when dealing with their relationship.

There isn’t a lot of new ground in Pascal’s genial evil overlord character – fangs are added to the returned bullying jock in the workplace, which doesn’t make a huge difference – but the actor is so deft and having such a good time here that he succeeds in giving the guy some original (un)life anyway.

For those who care about such things, the gore is impressive; the vamps in creature mode appear to be patterned after those on BUFFY.

The central joke in BLOODSUCKING BASTARDS – that even the undead might be more efficient and enthusiastic (and more enthusiastic about being efficient) than the average bored wage slave – is a good one. It just isn’t told here as well as it might have been.