The actors talk their characters in the new Starz comedy 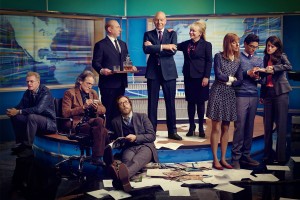 BLUNT TALK, Starz’s new half-hour comedy Saturdays at 9 PM, concerns a news program anchored by Walter Blunt. Patrick Stewart stars as Walter, who has a lot of idiosyncrasies and issues. Then again, so do all of his colleagues, including his senior producers, Celia, played by Dolly Wells, and Jim, portrayed by Timm Sharp.

Wells recently was seen in the second season of DOLL AND EM, the HBO comedy she co-created, produced and starred in with best friend Emily Mortimer; the English actress has previously been a regular in STAR STORIES, CAMPUS, SPY and SOME GIRLS and is in the upcoming feature film PRIDE AND PREJUDICE AND ZOMBIES. Sharp is American but shares Wells’ facility for both acting and writing, having scripted the feature STANDING STILL and costarred in the series UNDECLARED, ‘TIL DEATH and ENLIGHTENED.

Sharp notes that writer Ames seems to borrow a bit from the actors’ lives for their characters. “When Jonathan and I talked about the character one day over lunch, I was showing him some pictures in my phone, just of whatever we were talking about. And one of the pictures I showed him was of my garage. I had converted half of my garage into a workshop so I could do art projects, with welding and woodworking and stuff. And it looked like I was a hoarder. I think Jonathan had the idea of making the character a hoarder before he saw that, but then when he saw that, I think it was reassuring that he had cast the right person.”

Asked about the extensive physical comedy in BLUNT TALK, Wells and Sharp are both so enthusiastic that they wind up encouraging each other to expound on the subject.

For one of her physical bits as Celia, Wells says, “I can remember loving it, and it was such a simple thing, but I was thinking, ‘God, I wish I could do this all the time.’ I have to bring the right notes to Walter Blunt when he’s giving this talk. And I have to run down some stairs as quickly as I possibly can before I ruin his lines even more. And I remember thinking, ‘Even this little moment of physical comedy is just so, so enjoyable.’ I wanted to do this take a million times. Also, all the actors in it are so funny at physical comedy. There are moments between Timm and Karan [Soni, who plays Martin] where they’re fighting where I have to sort of walk over them to speak to somebody else, and they’re wrestling. I don’t know what it even is [about] – your hoarding?” she queries Sharp.

“It’s a big thing of elastic bands or something,” Wells recalls. 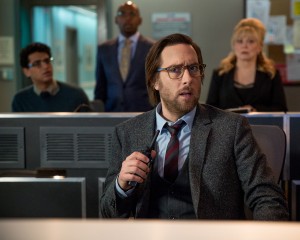 Sharp elaborates on why the characters get so physical. “I think some of it [is because] the actors that we have on this show are all so committed and really good at being grounded amongst these cartoonish scenarios. And I think that’s what makes it work so well, that we are all dedicated to still giving an honest performance, albeit cartoonish sometimes.”

Wells agrees. “Well, I suppose once you believe them and once you’re invested in their story, you are quite longing for them to do outlandish, ridiculous things, because it’s grounded so much in a newsroom where you’re seeing this other side of Walter Blunt.”

When the Q&A session ends, Wells and Sharp make themselves available for a little more blunt talk.

ASSIGNMENT X: Besides being a hoarder, does Jim have any other sort of interesting characteristics?

TIMM SHARP: There’s the shoe fetish and then there are some more that are revealed throughout the season. Jonathan Ames started to have fun adding more and more issues to my character’s laundry list of issues. By the end, my plate is full, to say the least.

AX: Do you see Jim’s issues as contradictory or as complementary?

SHARP: Complementary. I think the more layers to a character, the better.

AX: Celia seems to be a little bit in love with her boss Walter …

DOLLY WELLS: You’re right. She is. She’s not hiding it very well, is she? I think she’s also a romantic, in love with the idea of being in love, and being saved, whether it’s love or gambling or playing the piano or being very good at her job. I think she really has a great admiration for Walter and what he does, and she thinks he’s a sort of wonderful man who she can probably relate to. He’s rather lost. I mean, that’s what sort of unites all these characters is, they all have their own confusions and sadnesses and issues, and I think she has them too, plenty.

AX: Celia’s a producer, but she functions somewhat as an assistant. On the first season of DOLL AND EM, Doll was Em’s assistant. Did you feel like, “Oh, I’m going from playing one assistant to another,” or are they different enough that it wasn’t an issue?

WELLS: Yes, very different, luckily. In BLUNT TALK, it was a luxury that all I had to worry about was Celia, so I wasn’t worrying about every aspect of it, the writing or whatever. So that in itself was [different]. But I think also, Celia’s a senior producer – I don’t think Doll would be any good at Celia’s job, because she would just be hopeless. I mean, they’re both hopeless in different ways, but yes, they were very different experiences – DOLL AND EM, we had a very short time to shoot it. 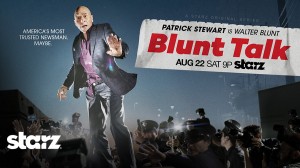 AX: Were either of you STAR TREK fans before coming to work with Patrick Stewart?

SHARP: [nods] Oh, I grew up with Patrick Stewart.

WELLS: I didn’t. I didn’t grow up with Patrick Stewart – I wish I had – but I will now [watch STAR TREK]. I mean, I know his other work, but I wasn’t a TREK fan. I have to revisit it, because he’s a wonderful actor.

AX: What would you most like people to know about BLUNT TALK?

SHARP: Full of heart, full of possibility and honesty. It shows flaws in a fun way.

This interview was conducted during Starz’s portion of the Television Critics Association summer press tour at the Beverly Hilton Hotel.