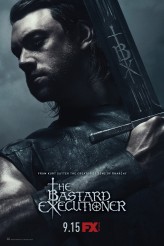 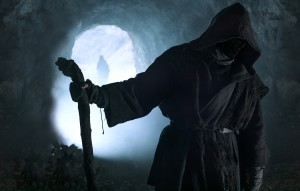 Kurt Sutter created SONS OF ANARCHY, the biker crime drama with themes from HAMLET that wrapped its seven-season run on FX last year. Now Sutter is back at FX with THE BASTARD EXECUTIONER, premiering its Tuesday-night 10 PM run on September 15 with a double episode.

THE BASTARD EXECUTIONER is set in northern Wales in the 14th century. Soldier Wilkin Brattle (Lee Jones) has what he believes is an encounter with a divine messenger who instructs him to become an executioner under the sometimes conflicting influences of the mystic Annora (Katey Sagal) and ambitious politician Milus Corbett (Stephen Moyer).

Addressing the Television Critics Association in a Q&A panel for the new show, Sutter, who also serves as the series executive producer/show runner/occasional director and plays the character Dark Mute, says that he had preliminary conversations about EXECUTIONER with FX Networks CEO John Landgraf. “We [discussed] the idea of this character and some of the complications of coming into this world. And his original response, and rightly so, was that he doesn’t want to show where there’s a head in a basket every week, and I agreed with that.

“The way I work is, before I pitch anything, I usually do essentially a pitch document, but it ultimately became a treatment and, quite frankly, pretty much what everyone was prepping from until about two weeks before we shot the pilot. So I went in with a lot of details of the world and the mythology. And I think that John sparked to the character, the depth of the mythology, the themes in it. And although it was unlike anything [FX] had really done before, I think that sense for John and for me [is], it’s always about character and relationship, and that the world, as it was with SONS, the outlaw motorcycle culture became backdrop to a show about a very conflicted hero and the relationships that surrounded him, and I think [Landgraf] had a sense of, “This is what will happen here.” So the period and the job functions and all that will ultimately become backdrop for what will be, I hope, an interesting character struggle and complex relationships. So it really wasn’t a hard sell.”

As to why Sutter chose to set his new show in 14th-century Wales, he points out that it would be hard to tell EXECUTIONER’s story in, say, 1960s America. “It wasn’t like I was looking for a period piece. I knew that I didn’t want to do anything else in the crime genre – I mean, I loved THE SHIELD and loved SONS, but really creatively wanted to do something else, and so it definitely ticked those boxes.

“And then, I love history, so I got to immerse myself in the history of the Plantagenets and that whole really f***ed-up lineage. And then when we set it in Wales, suddenly it presented all these great, less-documented external conflicts and external pressures as far as the rebellions that were going on. So the world definitely has its own mythology and history. One of the things that is really fun for me is that we have our fictitious characters and our fictitious shire, but it’s set in a very real Wales, in real England. So even in first season, we’re able to do it. We get to intersect our fictional world with real history and have them meet and play out. We’ll hopefully be able to continue to do that, but I didn’t say I was looking for something that was going to require three weeks to hand-sew a costume.”

There is a mystical, mythological aspect to EXECUTIONER that wasn’t present in SONS or in Sutter’s earlier work on THE SHIELD. Asked about this, Sutter first cites Sagal’s Gemma Teller Morrow character on SONS. “Well, Gemma had psychic powers – oh, no, she was just psychotic,” he quips. He then continues, more seriously, “There is definitely a mystical component to the show. Part of the bigger mythology that’s guiding Wilkin, that has to do with that first scene, is part of the mythology that we will lay breadcrumbs to throughout the course of the series, that will ultimately be where our hero goes. And I’ve said this a hundred times, but it’s just an opportunity to work out all my Catholic sh**.”

When the Q&A session ends, Sutter spends some time with a smaller group of reporters for some additional discussion.

ASSIGNMENT X: You mentioned that there was something that needed to be reshot because of the way it looked …

KURT SUTTER: The first visual effects we had – it’s supposed to be a guy who’s a burn victim and I felt like it didn’t portray that enough and to me, he almost looked like an alien. I felt like people are going to come out of this pilot with enough head-scratching, so we actually found somebody else to do our makeup, which ended up being half the amount of time and looks much better, so that’s actually in Episode Three, so we’re going to go in and reshoot with the other prosthetics, just because it looks much more realistic.

AX: How did you come to cast Australian actor Lee Jones as your Welsh protagonist Wilkin Brattle?

SUTTER: We looked at hundreds of actors for this role, some really amazing British actors, and they all to me felt slightly too refined. It’s a tough bill. You have to have somebody with the chops and the training and then with the right physicality and the right vulnerability. And we really saw a lot of people. And [fellow executive producer/director] Paris [Barclay] and I both watched the tape of Lee, who ironically was in L.A., and it was a really compelling read. We brought him out, and from the moment he opened his mouth, we knew he was the guy. Just something Aussie actors, I think it’s why they work so much, is that there’s a sort of rawness about them. He’s got classical training up the wazoo, so I know he’s got the chops to do it, but there was just a quality about it that was a little bit more raw, a little bit more unpredictable, and we just knew he was the guy.

AX: You’ve also created a role for yourself as the Dark Mute. Can you tell us a little bit about that?

SUTTER: I am the only one who will hire me as an actor, so there’s that. Look, I love acting, it was my first passion. [It was great] to play with these amazing actors, and this role is fun in that, a lot like Annora’s character , it really is in the background as part of the bigger mythology. I think I end up in five episodes this season, and [Episode] One is a bigger episode, but for the most part, it’s just his relationship with Annora and how we slowly drop breadcrumbs as to what their roles are in the world.