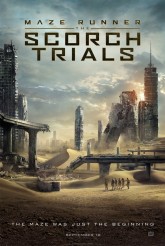 An action-filled YA dystopian sci-fi sequel 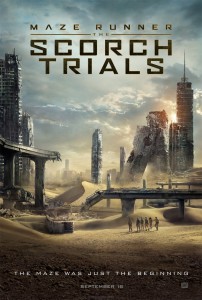 To answer one burning question about MAZE RUNNER: THE SCORCH TRIALS, yes, it’s easily possible to follow what’s going on in without having seen 2014’s original THE MAZE RUNNER. To answer a second question, no, this isn’t because we get tackled with a ton of exposition, but rather because screenwriter T.S. Nowlin and director Wes Ball, working from James Dashner’s novel, adeptly keep information flowing along with the action. It helps, of course, that most of the characters are running around without complete information on what’s happening.

We’re in a future, where a plague has decimated humanity and we find what looks like bombings have melted the cities and the landscape. Our hero Thomas (Dylan O’Brien) still has gaps in his memories, but he and his surviving comrades have been rescued from the Maze of the previous film by a group headed up by Mr. Janssen (Aiden Gillen). It gives away very little to say that Gillen plays Janssen with the kind of slipperiness he brings to his GAME OF THRONES character, and it doesn’t take Thomas long to suspect that the shelter of the well-protected bunker with its clean beds, food and showers is not the safe haven it’s made out to be.

Soon circumstances have Thomas and his friends both old and new venturing out into the Scorch, as the world beyond the bunker is known. It is inhabited by flesh-rending Cranks – humans turned by disease into fast-running monsters – and some generally unscrupulous types. Thomas is set on finding a possibly mythical rebel group called the Right Arm that may or may not be hiding in the mountains.

Ball directs SCORCH TRIALS with ample zest – the action sequences are brawny and brutal (for PG-13, at least), many of the stunts are thrilling and the monsters are satisfyingly scary. Nowlin’s screenplay barrels along but takes time for grace notes and is coherent within its own parameters. We know who is who and why they’re doing what they’re doing. Another asset is O’Brien, who makes a fine, soulful action hero.

There’s also a terrific adult supporting cast. Besides the able Gillen, we get Patricia Clarkson (back from the first film), Giancarlo Esposito, Lili Taylor, Barry Pepper and Alan Tudyk, all entirely committed to their characters.

There’s a huge logic glitch here that remains to be addressed – if these young people are all that valuable, why were they ever risked in the Maze? This aside, for those who tend to bundle YA dystopian fiction into a catch-all genre (the way some people do with horror, or rom-coms, or any form that isn’t a go-to favorite), SCORCH TRIALS may not bring anything new to the party. It has ethical dilemmas and plot twists, but there’s nothing in it that feels completely original, that belongs to this universe alone.

This aside, MAZE RUNNER: THE SCORCH TRIALS has everything one could ask from the middle of an action-adventure trilogy – it’s brisk, it’s clever and it’s very well-made.