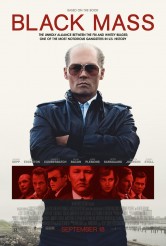 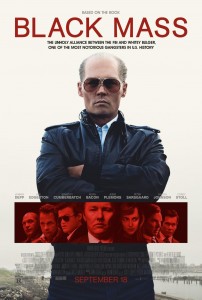 James “Whitey” Bulger was an infamous figure for decades and the story of his rise and fall seems even more likely fodder than most for a cinematic biopic. Not only was Bulger the head of a South Boston mob for decades, but his younger brother became a powerful state senator and a childhood friend went to work for the FBI and came to an extraordinary arrangement with the crime lord.

BLACK MASS includes all of these facts, but in what seems an effort to not overdo things, it feels like the screenplay by Mark Mallouk and Jez Butterworth, based on the nonfiction book by Dick Lehr and Gerald O’Neill, shies away from too much insight. We’re told that Bulger, played here by Johnny Depp, changes after certain personal losses, but we’re not shown that he’s doing anything differently. We’re never sure if FBI Agent John Connolly (Joel Edgerton) really thinks there’s professional value in his association with Bulger, or if he’s fully aware of the extent of the scam he’s perpetrating in order to maintain contact with his childhood hero and to keep Bulger one step ahead of the Feds. We don’t know how Jimmy’s younger brother Billy (Benedict Cumberbatch) managed to rise through the party ranks with a brother who did nine years in jail (something that happens before the film starts).

In other words, there are plenty of unique, intriguing issues to explore in BLACK MASS, but they get less attention than the more standard scenarios of bloody assassinations and arguments between couples. These are done effectively and fans of the genre will feel gratified, but it seems like there are some wasted opportunities here.

This said, BLACK MASS has its merits. Shot in and around Boston, it has atmosphere to spare, and the flip side of the narrative choices is that the film moves along at a fast clip; it’s never less than engaging.

The acting is certainly strong, starting with Depp’s Bulger, who is as tough and angry and mercurial as the material demands. Edgerton gives Connolly plenty of ego, passion and conviction. Cumberbatch presents us with a credible politician, with surface charisma and an underlying steel spine. Julianne Nicholson is splendid as Connolly’s increasingly tense wife Marianne, who has a better grasp of the situation than her husband realizes.

There’s also a bit of a problem with Depp’s makeup. It may be historically correct that Bulger has ice-blue eyes, but the contact lenses Depp wears in the role appear to obscure the normal expansion and contraction of pupils and are of a hue that make him look like a supernatural being. It’s distracting, to say the least.

BLACK MASS has historical details and craft to recommend it, but it feels more like reading a well-written newspaper article than a book; it’s more bullet points (pardon the pun) than an immersive experience.