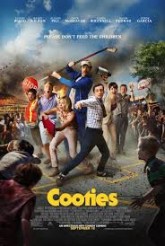 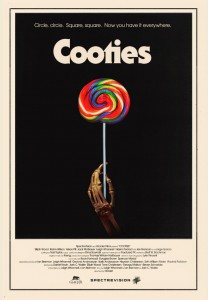 How good is COOTIES? The first twenty-five minutes or so (minus an opening sequence that will validate every vegetarian in the audience and make everyone else question fast-food chicken forever) could easily be mistaken for a quality comedy pilot about elementary school teachers on HBO or Showtime. Then the movie breaks out into killer-child-zombie boogaloo and, for the most part, retains its sharpness. The main complaint here is that once in awhile, the humor inexplicably reverts to something that would have been considered funny perhaps thirty years ago, and now feels so ancient that it bypasses being actually offensive in favor of being simply lame.

Clint (Elijah Wood) has returned in defeat to his small hometown of Chicken Fort after an unsuccessful career as a writer in New York City. He starts his first day as a substitute teacher at the local elementary school that he once attended as a pupil. Clint quickly encounters his old classmate and crush Lucy (Alison Pill), now a teacher here as well, and her P.E.-teaching jock boyfriend Wade (Rainn Wilson), along with the rest of the neurotic, eccentric staff.

Unbeknownst to them all, one little girl has consumed a piece of tainted fast-food chicken which turns her into a rampaging zombie. By the time the grown-ups have any idea of what’s happening, most of the kids have been bitten and turned, making leaving the building (and indeed survival) quite a challenge.

The writing by Leigh Whannell (SAW, INSIDIOUS) & Ian Brennan (GLEE), from a story they crafted with Josh C. Waller, has the snap and drollery of good TV comedy. This is as opposed to film comedy – even though viewers know they’re settling in for a 94-minute running time rather than the beginning of something that could play out over years, the start of COOTIES feels like we’re meant to settle in with these characters. We could easily see them, their interpersonal issues and their struggles with some of the kids (little horrors even before they become actual monsters) keeping on for many seasons.

The horror has full-tilt gore and some suspense, though directors Jonathan Milott & Cary Murnion weight the tone in favor of laughs. This tends to be the standard horror/comedy default position (it’s very hard to walk the line, and few in the genre tilt toward horror) and is usually successful enough, but sometimes they throw in a kitchen sink (an Asian cliché and a gay joke so flat it’s hard to believe anybody thought it could fly) that lands with a clunk and temporarily derails momentum.

Wood is just about perfect as the demoralized nebbish who rises to the occasion, and Wilson nails the mildly unhinged machismo of his sports-crazed action hero. Pill is pleasingly brainy as the least angst-ridden of the bunch and co-writer Whannell scores as a teacher who is partly off in his own world.

COOTIES has its problems, but for fans of the genre, it’s mostly good bloody fun.