Some Kind of Hate movie review 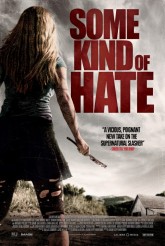 Movie Review: SOME KIND OF HATE 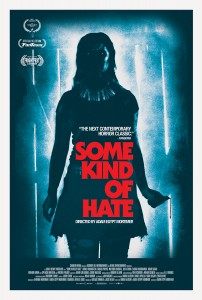 What’s an appropriate response to bullying and where does self-defense cross the line into active offense? These questions come up more and more in the drama genre, and they’ve been a supernatural staple since forever. SOME KIND OF HATE fuses the two in fairly effective fashion, even if it’s not tremendously scary.

High-school student Lincoln (Ronen Rubenstein), being raised by an alcoholic single father, has been picked on for ages at school. When he finally lashes out physically at one of his tormentors, he’s packed off to a faith-based isolated boarding school in the high desert. At first, Lincoln believes he’s safe among like-minded peers, but thanks to misguided efforts by a clueless roommate (Spencer Breslin), more bullying ensues. Exhausted, disillusioned and furious, Lincoln wishes aloud that they’d all die.

Turns out the Mind’s Eye Institute has seen some vicious behavior before. Moira (Sierra McCormick), a previous student whose death was ruled a suicide, hears Lincoln and comes to provide way more help with that wish than he really wanted.

SOME KIND OF HATE was clearly made on a modest budget, but it’s crafted in a way where it doesn’t seem to be lacking anything it requires. Likewise, while it’s unpretentious and straight-ahead in its storytelling, it actually does effectively cover how a teen can go from feeling rightfully tormented and unheard to lashing out murderously at not only the tormentors but at complete innocents. As a metaphor for addressing phenomena like students who attack their schools, it actually holds up.

Part of the reason that SOME KIND OF HATE works so well is that Lincoln, as played by Rubinstein and as written by Brian De Leeuw & director Adam Egypt Mortimer, is a persuasive loner antihero who’d much rather walk away than fight but who is ready to die for his convictions. Moira’s character is written in a way that invites a good deal of sympathy, even though we recognize she’s over the edge (and of course a vengeful ghost). McCormick plays her with a mixture of vulnerability and righteous fury that makes Moira a character we care about rather than simply a plot device. When we finally hear her big secret, we a) can understand why she has enough rage to come back from the dead and b) sadly can believe this kind of thing could easily happen, especially in a setting where adult supervision is minimal.

SOME KIND OF HATE is a low-budget teen ghost story with an allegory that’s there for anyone who wants to buy into it. It’s not hugely ambitious or even original, but it succeeds in all that it attempts.