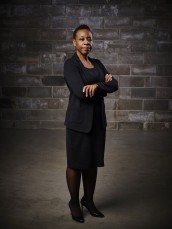 The actress talks her FBI role in the new NBC thriller 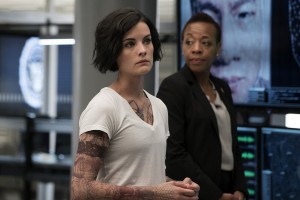 In NBC’s new series BLINDSPOT, premiering Monday, September 21 at 10 PM, Jaimie Alexander stars as Jane Doe. We meet Janes as she emerges from a duffel bag in the middle of Times Square, naked, amnesiac and covered in elaborate tattoos. The most prominent tattoo is the name of FBI Agent Kurt Weller (Sullivan Stapleton), so even though they’ve never met before (to their knowledge), Kurt and the remarkably physically capable Jane collaborate in working on the mystery surrounding her appearance.

Kurt’s FBI boss, Bethany Mayfair, is played by Marianne Jean-Baptiste. This isn’t the actress’ first stint playing U.S. law enforcement in New York – she played NYPD homicide detective Vivian Johnson on seven seasons of WITHOUT A TRACE. Batiste garnered a Supporting Actress Oscar nomination for her work in SECRETS AND LIES, made by director/writer Mike Leigh, who has his cast improvise extensively before rolling film. Although she’s played many Americans, Baptiste is actually from London, which is evident when she speaks in her real voice.

ASSIGNMENT X: Since the show is mysteries within mysteries, you probably can’t say much, but what can you reveal about your BLINDSPOT character?

MARIANNE JEAN-BAPTISTE: I play Bethany Mayfair, who is assistant chief of the FBI, so she’s the boss. She runs a group of agents. She works in the city.

AX: Having done WITHOUT A TRACE, which was another crime-fighting procedural in New York, do you feel that you’re back on familiar turf, or do you feel BLINDSPOT is very different?

JEAN-BAPTISTE: I think it’s very different. There are very different elements to this piece. There’s humor, a lot of character development, although it’s procedural. [The Jane Doe character has tattoos all over her body, with clues that lead to various things that are going on. So it’s multi-layered and I think it’s like solving a puzzle every week, which is the procedural aspect of it, but we have some very complex character stuff going on also.

AX: Does Bethany Mayfair know more than she’s letting on?

JEAN-BAPTISTE: Yes, she most certainly does.

AX: How is playing the possessor of unspoken wisdom?

JEAN-BAPTISTE: It’s interesting. Do you know what I mean? Because there’s something quite duplicitous about it. She is playing her cards very close to her chest, and that’s always interesting, because you have to convince people that you know as much as they do.

AX: Do you particularly enjoy playing law enforcement personnel, or is that just how American television tends to cast you?

JEAN-BAPTISTE: I think that’s how it works out. But I do quite enjoy it, because if you were to say to somebody who knows me, “She’s playing law enforcement or a judge,” they’d probably laugh.

AX: You’re playing another American. How hard or easy is that for you?

JEAN-BAPTISTE: I think it’s fairly easy. I mean, I don’t want to say it’s easy – I work at it, but I enjoy it. I enjoy working on it; I enjoy the nuances.

AX: Having worked with Mike Leigh, getting to rehearse and improvise for a long time before the script is finalized and shooting begins, do you miss that way of working when you’re not working on it, or was that just a different way of working?

JEAN-BAPTISTE: I mean, of course, on some level, you do miss it, but if you know you’re going to go to a sushi restaurant, you’re not going to hanker for a piece of steak, you’re going to have sushi. That’s how I see it.

AX: What would you most like people to know about BLINDSPOT?

JEAN-BAPTISTE: Probably that it’s a roller-coaster ride. You’ve got to hold on tight, because when you think you know what’s going on, something comes left of center and throws you off-track again.

This interview was conducted at NBC Universal’s party at Spago restaurant in Beverly Hills for the Television Critics Association summer press tour.