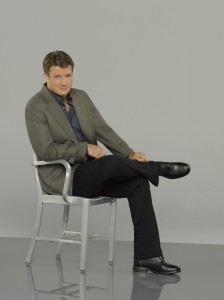 When ABC’s CASTLE ended its seventh season this spring, it looked as though the series might be wrapping up. After all, our hero Richard Castle (Nathan Fillion) had not only married the love of his life, NYPD homicide detective Kate Beckett (Stana Katic), he’d also confronted and solved the haunting childhood memory that set him on the path to becoming a famous mystery writer in the first place. Beckett had aced her police captain’s exam and had been approached about running for political office. Castle’s daughter Alexis (Molly C. Quinn) was excelling in college, Beckett’s colleagues Esposito (Jon Huertas) and Ryan (Seamus Dever) were riding high on their latest win and Castle’s actress mom Martha (Susan Sullivan) was a hit on Broadway.

Even so, there’s plenty of life in the premise, as CASTLE’s new show runners Alexi Hawley and Terence Paul Winter are the first to acknowledge. CASTLE returns for its eighth season on ABC, Mondays at 10 PM, starting September 21, and Hawley and Winter are happy to tease what we can expect.

ASSIGNMENT X: Terence Paul Winter, who is not to be confused with Terence Winter, who created BOARDWALK EMPIRE …

TERENCE PAUL WINTER: Emmy-winning, brilliant – one of the nicest guys in Hollywood, by the way.

AX: Have you and Terence no-middle-name Winter ever collaborated?

WINTER: Never collaborated – well, we collaborated over a lunch one time, and we sent emails back and forth, but that’s about it.

AX: You were already on staff on CASTLE before becoming show runner …

WINTER: Since first season. I’m the last of the original CASTLE the writers.

AX: And Alexi Hawley, when did you start on CASTLE?

AX: What brought you back to CASTLE?

HAWLEY: You know, I’ve always loved CASTLE. It felt like I’m at home, and the opportunity to work with Terence again, and tell these stories, was really exciting.

AX: CASTLE series creator Andrew W. Marlowe turned the show runner reins over to David Amann last season. What happened to cause the change in show runners again after just one year?

WINTER: and Andrew was still very much a part of the show last year, but David Amann, you’d have to talk to him, I believe he just wanted to go develop [his own series] this year. And Andrew wanted to do the same thing. Amann had been with the show for I think four or five years and Andrew obviously since the pilot, he originated the show.

HAWLEY: I know nothing. I just showed up.

AX: Penny Johson Jerald, who played Captain Gates, is not back as a series regular this season. Should we infer from this fact that Beckett is now the precinct captain?

HAWLEY: I think that’s safe to infer. Ultimately, for us, [Beckett is] a much more active captain than Penny or Ruben [Santiago-Hudson] as Captain Montgomery were. She’s still going to be very much involved in the day to day of cases, but it felt like, coming in, we really needed to change the show up a little bit and put some new energy into it.

AX: Was it a challenge to figure out how can Beckett can be captain and still solving crimes with Castle?

HAWLEY: Yeah, it was. At the end of the day, it felt like she could do the job, but also, we could infuse some new storytelling by having her in a different relationship with Ryan and Esposito, because now she’s their boss, with Castle, because now she’s the captain of the precinct, and so it’s not like he can sit outside her door every day while she’s being captain. So it felt like an opportunity to give ourselves some challenges in a way that could give this show [a different kind of energy].

AX: Coming off THE FOLLOWING, is it a relief to be on something a little softer, or are you bringing any of that harder-edged sensibility to CASTLE?

HAWLEY: My heart is still broken about THE FOLLOWING not coming back. I am very proud of the season that we had last year. The great thing about CASTLE, though, is that tonally, it checks a lot of boxes. It’s very funny, but it also can be serious, it can be emotional, it can be scary at times. I mean, when I was here, I did a very funny – I hope – curse of the Mummy episode, but I also did a PTSD episode about a sniper. So the exciting thing about the show is that you can tell all kinds of different stories.

AX: You’re adding two new characters to CASTLE this season. What can you say about them?

HAWLEY: They’re fantastic. What’s exciting about them is that they’re voices that the show doesn’t have. Toks Olegundoye and Sunkrish [Bala as Vikram Singh] are both exciting actors. Toks is playing a character named Hayley who is an independent investigator with a little bit of a questionable law enforcement past. For Castle, ultimately, he’s used to operating as police-adjacent, he’s used to doing things the way police do it, and she does things very differently, and so I think, as she interacts with him in our show, it shows some new storytelling possibilities for them.

Sunkrish plays more of a tech guy. He gets introduced in the two-parter in a very exciting way and then ultimately ends up becoming a part of our day-to-day show.

AX: Now, at the end of Season 7, it seemed like Martha and Alexis were both moving out of Castle’s apartment. How do you bring them back into the show?

WINTER: Honestly, they’re not going back in, but everyone’s still going to be very much a part of the show. Last time we saw Martha, she was doing very well with her Broadway show, which is still continuing to do very well, and she’s got a new place, which we’re going to discover, but she very much is a part of her favorite and only son’s life, where she comes and she has advice and suggestions and she brings the same humor and fun that she always has. Martha will always be a part of the CASTLE experience.

HAWLEY: And the fun with Alexis this season is, we get to grow up. She’s played a child growing up, but now she’s in her early twenties and she’s in her last year of college, and so we really wanted to shake her up a little bit to make her have a different relationship with her father, who now has to treat her like a grown woman and get her involved in certain ways with the casework that’s going on.

AX: Are are there things that you’re getting to do this season that you weren’t able to do on CASTLE previously?

HAWLEY: Previously? There were some stories, there were some characters, there were some cases that we’re definitely doing this year that didn’t get made before, and that’s not through anybody’s fault – we just had an idea and it didn’t come to fruition, but four years later, it still seems like a great idea, so we’re going to do it.

WINTER: That’s one of the great things about CASTLE, is that it has the ability to have so many different stories. Even in those hundred and fifty-one episodes we did [in the first seven seasons], we never ran out of ideas. Even though we do have some that we batted around back and forth, finally, some of them are going to come to life, there are some new ones that are going to come to life, and it’s exciting.

AX: Do you see this season as a victory lap, or do you think CASTLE can go on awhile longer?

HAWLEY: I think it can go [longer]. These are much-loved characters and we love them and I think at the end of the day, these kinds of shows are all about the characters. And as long as there are character stories to tell, you’ll find [ways] to tell them.

AX: What is your collaboration like with each other as show runners?

HAWLEY: The good news is that we worked together for three seasons earlier in the life of the show and it is a true partnership. We split things up and we kick things around and at the end of the day, we’re in it together.

WINTER: What’s kind of delightful about when Alexi and I got back together again, and started trying to figure out what this year was going to be, we just fell right back into our old rhythms, just like it was Seasons 2, 3 and 4. It’s just been great, because there’s been none of this “getting to know you” phase. We know each other. We’ve worked with each other. We’re having a good time building stories.

AX: Are there any other CASTLE writers’ room veterans who are still there?

AX: Do either of you have other projects going on that we should know about?

HAWLEY: I have a few things, but nothing active and nothing to talk about right now.

AX: What would both of you most like people to know about CASTLE Season 8?

HAWLEY: I think ultimately that this season continues to be about [Castle and Beckett’s] love affair and their relationship, and as we dive into it and try and shake things up, we’re going to be true to that and have fun with it.

WINTER: I absolutely agree. Everything you said, I agree with. It’s going to be a fun, dynamic season. In our launch, we’ve got some exciting tent-poles we’re going to hit, things are constantly shifting in a fun way, and the one thing we’re always going to have, it’s steeped in the DNA of the show, is the fun cases and the Castle and Beckett love story.

This interview was conducted at ABC Network’s party for the Television Critics Association summer press tour at the Beverly Hilton Hotel.

TV Review: WAREHOUSE 13 - Season 3 - “Past Imperfect”
TV Review: CHUCK - Season 5 - "Vs. the Santa Suit"
WHAT WE DO IN THE SHADOWS: Actor Mark Proksch on playing an energy vam...
UTOPIA: Creator and executive producer Gillian Flynn on Season 1 - Int...