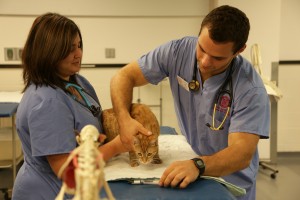 National Geographic Wild has experienced great success with their veterinarian series – THE INCREDIBLE DR. POL continues to be a ratings hit – and the network is now launching a new one. VET SCHOOL, which premieres Saturday, September 19 at 10 PM, follows a group of university students in a four-year program.

ASSIGNMENT X: Where is the vet school actually located?

AX: How did VET SCHOOL come together as a project?

TANZER: I work for Think Factory Media, and they came up with the concept of the show and talked to Nat Geo Wild about it and decided that it would be a great show to do, and then they started speaking to colleges, and talked to Cornell, and Cornell was right on board to do it and wanted desperately to do it with us, so Think Factory Media got the relationship going with Cornell and with Nat Geo Wild.

I started working in this industry twenty years ago and just sort of developed this way, and I have a particular affinity for animal-based shows. I grew up on a farm, I almost became a vet, that’s my interest, so this was just a natural fit.

AX: How many students does VET SCHOOL focus on?

AX: Veterinary school, or any kind of medical school, is very arduous for the students. How does adding cameras affect the situation?

TANZER: It makes it a little tough sometimes, but the students were really good about having us be involved, and the school was great. They helped us get into all of the areas that we needed to get into so we could follow the students through their classes and their rotations.

AX: I don’t know if this is still an issue, but it used to be an issue in veterinary schools, students were required to kill some animals in order to study them, which would kind of seem to be a moral contradiction with the nature of the job. Is that still the case, and how is that dealt with?

TANZER: I didn’t observe any of that, and I know that some animals are euthanized due to their injuries or their illnesses, but not healthy animals. I did not see that at all.

AX: What sorts of animals are treated on the show? I mean, are they primarily domestic dogs and cats, or are they large animals as well?

AX: There are a lot of farms in upstate New York?

AX: How many cases are in an episode and are there any cases that travel through the episodes?

AX: Is there such a thing as Broadcast Standards with National Geographic Wild, where they think something is too graphic?

TANZER: Yeah, there are, but we’re looking at things that really happen, and it’s not made up.

We don’t show every little bit of blood and guts. If an animal is being operated on and it’s a little bit graphic, we might not show as much as other places might, but we still show it – we show it in the terms of what they’re trying to accomplish for the animal.

TANZER: Horses are my favorite [laughs]. I’ve ridden since I was five years old, I still ride, I’ve been involved with horses all this time, and it’s just my passion.

AX: What’s something people should know about VET SCHOOL?

TANZER: That’s exactly right. A human that’s from Brazil is the same as a human from the United States. But when you’re talking about animals, a horse is very different from a bird. [The veterinary students] have got to learn the basics of all of that.

This interview was conducted at National Geographic’s party for the Television Critics Association summer press tour at the Beverly Hilton Hotel.