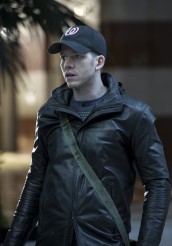 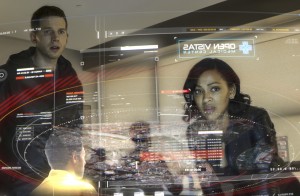 MINORITY REPORT is an interesting show at least from the “Pilot” episode. There is a lot going on here beyond just carrying over from where the movie left off.

In the television show, the events of the movie are not necessarily taken as gospel but they have an influence on where this show begins. The precog program has been abolished after abuse of the system resulted in some problematic issues with not only the precogs (who in this future were children at the time) and those that were arrested as a result of the program.

It is 20 years after the program was abolished and we are introduced to Dash (Stark Sands), one of the precog twins, that is now all grown up but still having his abilities. After living on “an island” for a long time, Dash wants to use his powers to help people rather than sit on the sidelines. So he has been living in Washington D.C. for a while trying to track down murders before they are committed. However, so far he has failed to do so.

When he fails this last time he runs into Detective Lara Vega (played by the hotter than balls Meagan Good) and gives her a tip as to who the killer might have been. She tracks him down using technology and she quickly learns he’s one of the long-forgotten precogs and is at first skeptical but rapidly finds out he’s on the level after he views another pre-murder taking place this time the wife of a D.C. mayoral candidate.

The duo track down the killer’s (who earlier killed himself after the police found him) residence, which is an institution for pre-crime killers that went through a program that damaged their brains. They find another person that may have some link to the upcoming murders but he escapes before they can bring him in. Later they are able to solve the pre-crime through Dash’s abilities as well as his brother, Arthur (Nick Zano), who is quite a bit different from his brother in that he is suave, slick and uses his abilities for personal gain.

The “Pilot” episode is interesting because it serves as more of a pre-crime-of-the-week rather than building up any sort of mythology that maybe a genre show such as this needs to get people behind it. Now they did give us a bit of this toward the end where Arthur talks with his sister, Agatha (Laura Regan), about her vision where they are once again threatened and used against their will in the government. But this is more of an afterthought after the main plot of the episode is over.

The good news is that much like the movie of the same name, there is a lot of premise here. The technology alone and how it is used is a very cool selling point. If they can get some more interesting plotlines going that will carry the show it might be a winner. However, Fox has a history of creating science fiction shows that are received with a milk warm reception and then backing off from its promotion.