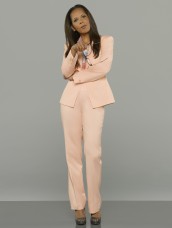 The actress talks Gates' reaction to Castle as a private investigator 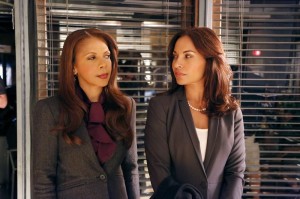 ABC’s CASTLE is in its seventh season, Monday nights at 10 PM. As of right now, nobody seems to know whether or not it will be back for an eighth year of romance and crime-solving with Nathan Fillion’s title character, a wealthy novelist who writes about crimes, and his muse (and now wife), NYPD homicide detective Kate Beckett, played by Stana Katic.

PENNY JOHNSON JERALD: I thought the episode [“Castle, P.I.”] was really epic. What’s exciting about it is that you have Castle unleashed out in the field as a PI and that is classic CASTLE.

JERALD: Oh, my God. The tête-à-tête that we have is unbelievable. The chemistry is amazing between Castle and the Gates character. Today, as I do every so often, I’ll binge out on TV. I was taking a short nap and THE ROCKFORD FILES was on. And I was just listening, and I thought, “This is CASTLE.” I think Nathan Fillion is now THE ROCKFORD FILES as a P.I.

AX: Do you feel like you’re harking back to the police captains in Humphrey Bogart movies, where they’re saying, “Listen, Marlowe, you can’t do that!”?

JERALD: Actually, yes, because I kind of say those words. My husband’s back East and he texts me [while CASTLE is on] and he says, “Are you watching?” I said, “It doesn’t come on for three more hours,” and he said, “Okay, well, I am, and this is epic.” Those are his words. And for him to say that, it means a lot.

AX: In Season 7, David Amann has taken over as show runner from series creator Andrew W. Marlowe. Is there anything different in the dynamic?

JERALD: I do miss [Marlowe’s] presence, but because they worked so well together hand in hand that when you see David, it’s kind of like seeing Andrew. The difference is that Andrew has this fatherly spirit, and David is more like a brotherly spirit, and there is a difference. But they’re both in the know, so it’s still in unity. So we’re not suffering.

AX: We’ve met Gates’ sister. Will we have an episode where we meet more of Gates’ family?

AX: Have you learned anything in the last year that’s helped you with playing Gates? Are you still researching or finding out things just from living?

AX: Had you been a lawyer before this?

JERALD: No. As a paralegal, which I challenged my daughter to go to school to do, but I’m the one who finished. And then after that, I decided to go to law school. So I put two years into that and last year decided, “I need to have more fun.” Mainly because my husband said I wasn’t a lot of fun any more. Daddy wins.

AX: Are you watching anything else on television?

JERALD: I don’t watch anything but CASTLE right now. And that’s mainly I have a new kid in my house …

AX: Did you adopt?

JERALD: Kinda-sorta, yes. Actually, I’m loving it. I thought my empty nest would be forever, but I guess it’s not. My husband and I are having a great time now with our nephew’s son.

JERALD: Yes. My husband and I are working on a project, Scratchback East and Scratchback West, where we put together budding artists to network and work on whatever it is that they’re working on, using acting, dance, writing. And we put people together so that they can work out all the kinks and eventually produce. Not only suggesting dancers and producers, they get to hear the play or whatever aloud, where they have musicians who have an input – “Why don’t we change that melody, tweak it here or there …” So it’s a networking thing.

AX: Do you see yourself doing CASTLE as long as it’s on?

JERALD: I want CASTLE to last as long as it possibly can. This is a great show. After thirty-something years of being in the business, to be able to just sail and enjoy, and I certainly am enjoying it.

JERALD: Well, CASTLE without fans is actually nothing, and so I give kudos to my fans, because they keep us on the map.

This interview was conducted during ABC’s party for the Television Critics Association at Pasadena’s Langham-Huntington Hotel.