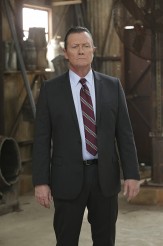 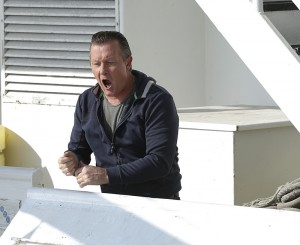 The main set for CBS’ SCORPION, now in its first season Mondays at 9 PM and picked up for Season 2, looks pretty much the way you’d expect. The team of geniuses assembled by Walter O’Brien (based on the real-life person of the same name, played in the series by Elyes Gabel) operates out of a ramshackle warehouse space in downtown Los Angeles. When the Television Critics Association is invited for a tour of the interior built on a soundstage in Manhattan Beach, Calif., there are bare pipes and grimy windows galore, all carefully crafted by the production design department.

Robert Patrick plays Cabe Gallo, the FBI agent who rides herd on Walter and Company. Viewers of the series know that Cabe and Walter first met when Walter was twelve. Cabe saw Walter’s potential and developed it, but when one of Walter’s inventions was used for destructive ends, Walter severed their ties. Now they are carefully patching up their relationship as they realize that not only their own emotional comfort but the lives of others depend on the two of them being able to trust one another.

Patrick, a film and television veteran, takes some time to discuss Cabe’s point of view in the latter half of SCORPION Season 1.

AX: Do you feel that Cabe is having the relationship that he hoped to have with Walter, or do you think that it’s evolving differently?

AX: Do you think that part of Cabe’s desire to be a father figure to Walter is related to the loss of Cabe’s biological daughter?

PATRICK: Absolutely. The loss of his daughter was a big, big thing to Cabe, and Walter has filled that vacuum, that void, and I’ve focused on Walter as a result, to the detriment of my marriage. It’s what Cabe had to do at the time. He just found Walter and really started focusing on him. And it ruined his life, it ruined his marriage. But I think that episode [“Rogue Element”] where we had my ex-wife [played by Jessica Tuck] come in shows that there’s potential that I’m learning and growing, too, as a human being. You never stop learning, no matter how old you are.

AX: Do you think, with Cabe’s history of badassdom, that we’re likely to see more people from his past who are not as well-disposed towards him as his ex-wife is?

PATRICK: I think Cabe is a real noble guy. I really do. I do think he’s a badass. I think you’re going to see more stuff with me and Merrick [played by David Fabrizio] with what actually happened in Iraq and when we lied to Walter and why we did that, what was up with that. Walter feels betrayed and I’m really trying to nurture that relationship. I’m trying to gain his trust again, and that’s a lot of what’s going on with him.

AX: Can you say what you might be doing over the hiatus?

PATRICK: I can’t announce anything yet. I’m still talking. I have a fantastic manager by the name of Leanne Coronel, who is on top of my schedule and she keeps her finger on the pulse and finds me things to do on my hiatus. She has to sort through a lot of scripts and figure out what’s the best thing for me to be doing. So there are a lot of things that come into play. I’ve got to do something good, I want to do a good script and I don’t want it to be a waste of time for me. Financially, it’s got to be rewarding as well. So that’s going to take what it’s going to be to get me off my motorcycle.

AX: And what would you most like people to know about SCORPION right now?

PATRICK: That it really is a great show, it’s a very unique show. I think it’s different from anything I’ve seen on television, and it’s really got some magic and it’s a lot of fun to watch. You’re going to learn something. And it’s amazing to me to read a lot of things that I’m getting on Twitter, like kids are going to college as a result of this show. I’ve had young children, through their parents, they’re so glad to see nerds or geeks being heroes. It’s good stuff. It really is good stuff. At the heart of this show is a lot of heart, and it’s about ultimately doing the right thing.